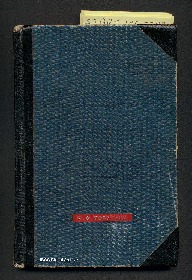 Flying log book for Keith Thompson covering his two periods of service as a navigator from 23 August 1942 to 28 March 1946 and post war from 12 September 1950 to 27 April 1960. The entries cover his training in Canada, advanced training on his return to Britain, converting to the Lancaster and a first tour on 101 Squadron, his rest tour and then 12 operations on the Halifax with 199 Squadron undertaking Radio Counter Measure operations. His post war flying was initially as a bombing instructor and then with Coastal Command on the Shackleton. This period included three round trips to Christmas Island for operation 'Grapple'. Units served at include No 1 A.O.S at R.C.A.F. Malton, 15 A.F.T.S at R.A.F. Carlisle, No 4 A.O.S. at R.A.F. West Freugh, 28 O.T.U. at R.A.F. Wymswold, Castle Donington and Bircotes, 1662 C.U. at R.A.F. Blyton, 101 Squadron at R.A.F. Ludford Magna, 30 O.T.U. at R.A.F. Hixon, 1659 H.C.U. at R.A.F. Topcliffe, 199 Squadron at R.A.F. North Creake, 192 Squadron at R.A.F. Foulsham, R.W.E. at R.A.F. Watton, R.A.F. Shawbury, C.G.S. at R.A.F. Leconfield, 2 A.N.S. at R.A.F. Thorney Island, 6 A.N.S.at R.A.F. Lichfield, 206 Squadron at R.A.F. St Eval and St Mawgan and Coastal Command Communication Flight at R.A.F Bovingdon. Aircraft in which flown, Anson in Canada Mk unknown, Mk 19 & 21, Tiger Moth, Wellington 1c, X and T10, Halifax II and III, Lancaster I and III, B17 Fortress, Valletta, Varsity, Shackleton I and II. Operations carried out against Berlin, Frankfurt, Stettin, Leipzig, Stuttgart, Schweinfurt, Essen, Nurnburg, Aulnoye, Rouen, Koln, Bois de Maintenon, Lyon, Hasselt, Orleans, Duisburg, Brunswick, Aachen, Trappes on his first tour and was awarded the D.F.C. He did 12 R.C.M. operations on his second tour and two Cook's Tours. The log book has the usual comments about weather and unusual sightings and events.