The memoir of Eric William Scott 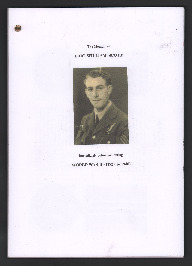 The memoir of Eric William Scott

Text and numerous b/w photographs (some of which are also located in sub-collection albums) covering from immediately before and during World War II - (1939-1946). First page has colour photographs and description of prisoner of war medal. Continues with account of RAFVR training including time at the Air Crew Reception Centre, St John's Wood, London, initial training at Stratford-upon-Avon and elementary flying training at RAF Watchfield. Gives account of journey to the United States to continue training on the Arnold Scheme at Turner Field, Albany, Georgia, Callstrom Field, Arcadia Florida, Gunter Field, Montgomery Alabama and Craig Field, Selma, Alabama flying Stearman, BT-13 and Harvard. At the last location an accident brought an end to his pilot training and he continues as navigator/bomb aimer at Picton in Ontario Canada. Pages contain many photographs, exttracts from the cadet handbook and his logbook. On return to UK he did operational training a RAF Moreton in the Marsh where he crewed up. He got married just before posting to North Africa. Gives account of journey to join 205 Group in North Africa and of first tour on 142 Squadron where he flew 38 operations and of life in North Africa. After this he was posted as an instructor to an operational training unit in Qastina Palestine where he had an opportunity to visit Jerusalem, Haifa, Bethlehem and Tel Aviv. In June 1944 he agreed to do a second tour and was posted to 37 Squadron at Foggia in Italy. Gives account of operations including gardening in the Danube river. Gives account of final operation to Maribor marshalling yard in Yugoslavia where after attack by night fighter he baled out of his aircraft. Follows with account of capture by Croatian military. hand over to the Germans and journey to Stalag Luft 7, Upper Silesia and life in prisoner of war camp. Then underwent the long march back to Germany in the face of Russian advance. Concludes with repatriation and life after return to England.