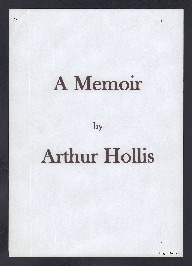 Second page has colour photograph of Arthur Hollis, wearing blazer with medals, standing in a field at an event. Narrative covers early life in Hornchurch and Carshalton including schooling and hospital admissions. Writes of Dulwich College studies and sport. Mentions visit to Paris. Career as chartered accountant. Joined local defence volunteers in 1940. On 18th birthday decided to apply for pilot training. Covers training in Manchester and the United States. Life in the States and training on PT-17, Vultee BT 13-A and Harvard. Describes subsequent training in Canada, journey back to United Kingdom and training on Oxfords and Wellington. Goes on with conversion to Lancaster, posting to 50 Squadron and describes life and operations. Instructor tour follows and goes on to describe meeting future wife and subsequent career in RAF including posting to Tiger Force and trip to Hong Kong and subsequent activities. Finishes with post war career and activities.