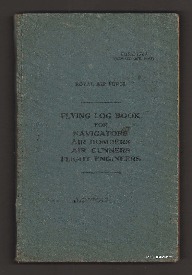 The log book covers the operational career of flight engineer David Sanders from 5 July 1944 to 29 May 1945. He joined 619 Squadron at RAF Strubby on 28 September 1944, from where he flew Lancasters on two daylight and three night time operations before being transferred to 189 Squadron at RAF Fulbeck in November 1944. From 21 November 1944 he flew a further four daylight and 14 night time operations, again in Lancasters. The majority of the targets his operations were over Germany, plus two to Poland, two to the Netherlands, and two Norway: Bergen, Bohlen, Braunschweig, Bremen, Dortmund, Flensburg, Gdynia, Hamburg, Heimbach, Karlsruhe, Lutzkendorf, Munich, Police, Sassnitz, Steinfurt, Tønsberg, Veere. Later log book entries are about Operation Dodge (Brussels).