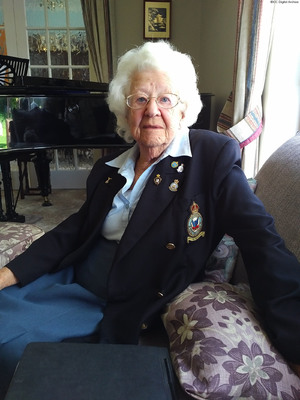 Alma Leedham grew up in London and worked for Hawker aircraft on the Hurricane at the start of the war . She later trained as a driver in the Women's Auxiliary Air Force. She served at RAF Scampton driving tractors taking bombs to the aircraft. Mentions various episodes of her service life: a flash accidentally blowing up a fully bombed Lancaster and setting fire to other nearby aircraft; delivering post from Scampton to Waddington; meeting her husband, a flight sergeant; her tractor being targeted by a German fighter plane. Describes the relationships between the WAAFs and the ground and aircrews at the base. Remembers the night the Dam busters went on the raid. Tells of her family life after the war.