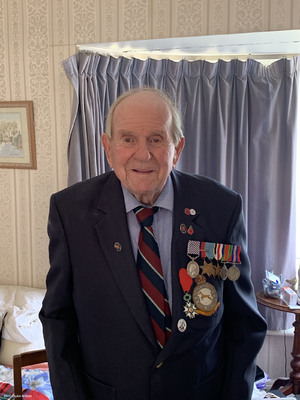 Colin Deverell was born in Croydon. Upon leaving school, he worked for Oliver Typewriter Company, where he gained engineering skills to become an amateur rigger for Imperial Airways, before finding employment with Rollaston Aircraft Services in 1939. His mother was killed in a bombing on Christmas Day 1940, motivating him to join the Royal Air Force in 1941 and train as a flight engineer. Deverell completed thirty operations based at RAF Wratting Common and RAF Tuddenham. He details the engineering differences between Stirlings and Lancasters and recollects the events of operations to Kiel, Lorient, Duisburg, Düsseldorf, Stuttgart, Peenemünde, Berlin, and Szczecin. He then completed a further four operations, filling in for a crew with an injured flight engineer. On his thirty-fourth operation to Szczecin, they were attacked and he burnt his hands extinguishing a fire on board. By 19, Deverell was promoted to flight lieutenant and awarded the Distinguished Flying Medal. In 1944, he undertook ten special operations that required low-flying to release boxes of equipment according to light signals from the French Resistance. In 1945, he took part in Operation Manna, before joining 51 Squadron to return servicemen from the Far East on converted Stirlings. Finally, he recalls his career following demobilisation in 1947, the treatment of Bomber Command, and attending reunions at Tuddenham. As the Honorary President of the Royal British Legion in his hometown of Tenterden, Deverell has also been awarded the Legion d’Honneur.