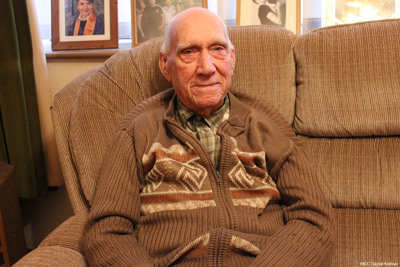 Louis Makens worked as a farm worker before the war but volunteered for aircrew. He discusses his training on Wellingtons and operations flying Stirlings with 196 Squadron including a crash landing, and glider towing. His Halifax was shot down 18/19 March 1944 on the way to Frankfurt. It was his seventh operation, but his first as a mid under gunner with 76 Squadron from RAF Holme-on-Spalding Moor. He became a prisoner of war and discusses that as an extra gunner with a new crew, he only got to know his pilot David Joseph during captivity. He describes his capture and treatment and the conditions at Stalag Luft 6, the contents of Red Cross parcels, and the prisoners' attitude to the guards. Hedescribes the conditions on the long march through Germany away from the advancing Russians. Eventually he found the advancing Allied army. After the war, he was remustered as a driver and was demobbed in 1946. He found employment with Stramit manufacturing strawboard building material.