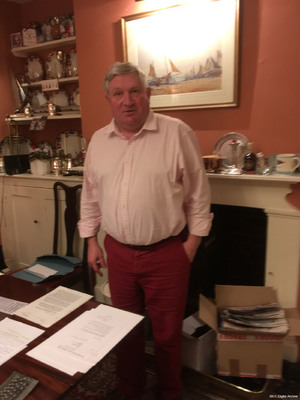 Richard’s father, Arthur Hollis, went to Dulwich College as a day boy. He left at sixteen to join the Home Guard , then worked for a firm of accountants for a couple of years before joining the Royal Air Force. He was sent to Manchester University for about six months and then to Florida to learn to fly. He went to Nova Scotia and then travelled by train to Florida. Arthur was posted to Clewiston airfield and was soon selected for acting corporal. After finishing his training, he was posted to Canada where he received a commission. His next posting was to RAF Little Rissington to learn to fly twin-engine aircraft and then to the Operational Training Unit at RAF North Luffenham working on Wellingtons. He also went on a course for advanced flying and then joined the conversion course at RAF Swinderby with Manchesters, where he picked up the rest of his crew. Arthur recalled December 1942 when he had to bale out at thousand five hundred feet on the orders of the captain. His parachute, not being fastened properly, tore his flying jacket and he came down holding the parachute with his arms. In March 1943 he started flying operationally at RAF Skellingthorpe with 50 Squadron. Off the Dutch coast he was in collision with a Halifax which had been early. It cut off and damaged the starboard wing and put an engine out of action. Arthur had brought his crew back safely. The crew continued operations flying to Hamburg and Essen. On one occasion they were caught in searchlights, attacked by a fighter, and damaged by anti-aircraft fire. They managed to get home and Arthur was later awarded the DFC. The last two operations were to Milan to bomb the marshalling yards. Arthur completed thirty operations and had flown 20 different Lancasters, of which only one survived the war. Upon completion of his tour, to No. 11 OTU at RAF Westcott and RAF Oakley, where he met Betty who became his wife.