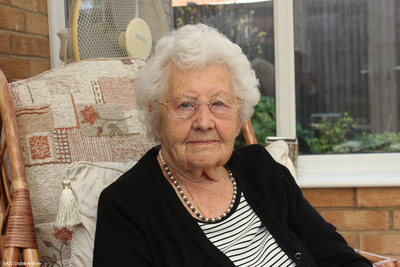 Marion Hollier served as a wireless operator in the Women's Auxiliary Air Force from February 1944 to September 1946. Before the war she worked in a construction firm, The George Wimpey Company, which built aerodromes. She learned the Morse code in the Women’s Junior Air Corps. Tells of her father who served as a telegraphist in the First World War. Later on, she joined the Air Training Corps. She was trained at RAF Wilmslow, then Blackpool on the Morse code, before moving to RAF Ludford Magna, with 101 Squadron, and from there to RAF Wickenby with 626 and 12 Squadron. At RAF Wickenby her duties included radio transmitting and carrying out inspections on aircraft. While she was stationed at RAF Ludford Magna, she witnessed enemy aircraft strafing headquarters.