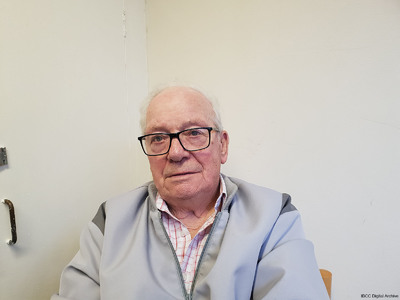 Bert Turner was a member of the Air Training Corps before the war. He volunteered for the Air Force and was called up 2 August 1942. After training he became a flight engineer with 196 Squadron. He flew some bombing and mine laying operations before the squadron was transferred to Transport Command. He remembers dropping supplies to the Special Operations Executive and paratroopers on D-Day. His Stirling was hit by anti-aircraft fire on a supply drop over France but they managed to return to England. He was later shot down by Fw 190s over Holland. His rear gunner was killed he describes how they were attacked while on their parachutes. He was wounded in the ankle by shrapnel. He evaded and met up with Allied troops. After returning to operations after a lengthy convalescence, he was shot down a second time by a Me 262 over Germany. He discusses the role of the flight engineer on Stirlings. When Bert returned to London he decided he was so close he would go and visit his father not knowing that he had received the telegram saying he was missing presumed killed. When he saw his son he thought he was a ghost and passed out.