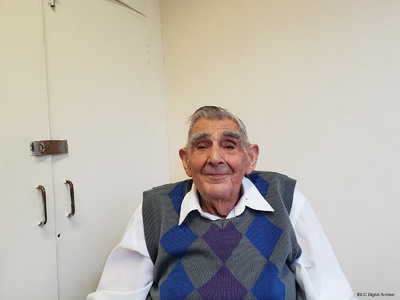 Jim was born in July 1923 in Burton on Trent and was the eldest of six children. His father served in the First World War. When Jim left school aged 14, he joined the Boys Brigade which had a Royal Air Force section and he had the chance to fly in a Tiger Moth. He trained to be an apprentice joiner and carpenter and worked with his grandfather who was a master joiner. He then joined Sharp Bros & Knight, timber and joinery manufacturers. When he was about 17, the Boys Brigade sent him to RAF Cardington for an air crew interview, which he failed due to ear problems. He then took the exam and was recommended to be a voluntary reserve.
When Jim was about 18, he was called up to go to RAF Halton for aircraft training, after which he was sent for further training at RAF Abingdon Operational Training Unit on Hampden and Witney aircraft. He was then sent back to RAF Halton to do a fitter course and then posted to 23 Operational Training Unit at RAF Pershore working on Wellingtons. After training Jim became a leading aircraftman. In September 1943 Jim was posted to 206 Squadron on the Wirral for about two weeks. The outfit totalled about 1,000 people from the Air Force, Army and Navy. His unit was then sent to the Liverpool docks to join the troop ship Laconia heading for Bangor and then on to Azores where 8206 Maintenance Unit built an Air Force station and runway. They stayed in tents with eight people for up to a year. Over Christmas Jim was in a Portuguese hospital for about three days with a broken finger. The unit went to Casablanca then to Cornwall just before D-Day. He was put on night shift at RAF St Mawgan with 206 Squadron working on Liberators. Following a trip to Scotland they were posted at Dundee with an air salvaging and servicing unit. Here he was made acting corporal and worked with 31 Dakota Squadron. When the war ended, he was flown to Singapore, got a boat to Southampton and was discharged to complete his apprenticeship as a joiner. Jim re-joined the Air Force and went back to RAF Swinderby for four years working on Wellingtons. There he met his future wife. In 1951 the unit went to Singapore to work on Sunderlands before being posted back home. Jim left in 1966 and worked for AV Roe until joining ICL in a management job.