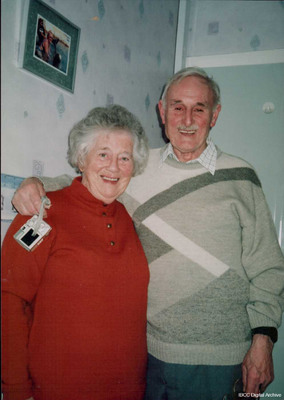 Ron was born in Stoke-on-Trent. He left school at fourteen and tells of his experiences working in a pottery factory doing odd jobs until he was called up. He joined the Royal Air Force in 1939 at the age of twenty-two. Ron trained as an air gunner at RAF Morecambe after initially wanting to be selected for pilot training. He completed his air gunner training in South Wales at the end of the Battle of Britain - he tells of being strafed by a Junkers 88 and the damage that was inflicted to the Nissen huts. Ron flew the Whitley, which he did not enjoy. He then went to an Operational Training Unit at RAF Abingdon before moving to 58 Squadron based at RAF Linton on Ouse. Ron tells of being forced to bale out in 1941 after his Whitley was attacked by two German fighters over the the Netherlands. He did not remember that much since ammunition was exploding and a bullet hit him in the back of the head, leaving him with memory, taste and smell impairment. Ron also tells of his first interrogation by a German officer and how his humour nearly causing trouble at the at Cologne railway station. He was transferred to Stalag Luft I and then to Stalag Luft III. Ron tried a few times to escape but was discovered every time - he also details the death of his close friend during one attempt. Ron was eventually transferred to Stalag Luft VI (Heydekrug, Lithuania) which was his last camp before the end of the war. However, with the end looming, Ron was then forced to go on the long march. He then tells of some of his memories of the event, including being strafed by British fighters. Ron was freed when the British Army 10th Hussars caught up with the group near Lubeck, and he tells the story of his homecoming in May 1945.