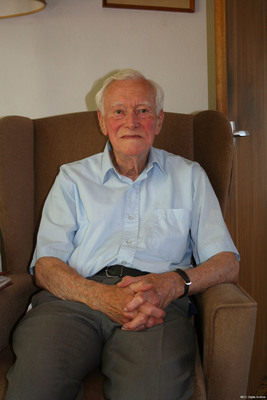 Harold Kirby joined up the Royal Air Force encouraged by two friends, but ended up training as a flight mechanic at RAF Halton on medical grounds. Harold became them airframe fitter, volunteered as a flight engineer, passed the physical but was then posted as a fitter at RAF Binbrook for six months with 460 Squadron. He was then at RAF Saint Athan to train as a flight engineer, then to RAF Winthorpe Heavy Conversion Unit with an all-Australian aircrew. Harold recollects a crash landing at RAF Woodbridge, followed by attending Lancaster Finishing School at RAF Syerston. He was then posted to 467 Squadron at RAF Waddington. Discusses bombing operations over France V-1 weapons sites, a bomb falling through a wing, and crash landing at RAF Wittering. Harold was eventually posted to 97 Pathfinder Squadron at RAF Coningsby, owing to his array of skills and multiple qualifications. Discusses post war training as radar mechanic, employment at the General Electric Company and reunions with his Australian aircrew.