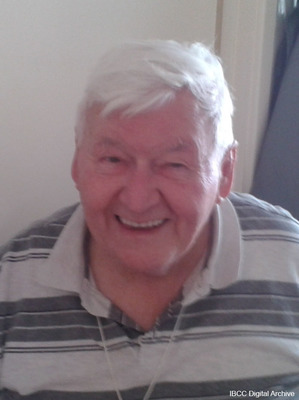 Ken Johnson was born in Doncaster. At the start of the war the family was living in Sheffield but his father decided they should move back to Doncaster to avoid bombing. Ken started work as a joiner and later made cables for barrage balloons. Despite being in a reserved occupation, he volunteered to join the RAF and trained in Scotland as an air gunner. He describes gunnery practice against towed targets and corkscrewing the aircraft. He formed a crew in the Operational Training Unit at RAF Bruntingthorpe. He talks about his pilot, Flight Sergeant Harold “Harry” Watkins, who fought in the Finnish Army against the Russians at the start of the war. Ken joined 61 Squadron at RAF Skellingthorpe flying Lancasters. His first operation was just after D-Day to bomb German armour but as they were too close to allied troops, it was aborted. Ken’s most traumatic experience was during an operation in July 1944, when an aircraft above his dropped its bombs and three bombs hit the aircraft including the rear turret, carrying it away with the rear gunner. On another occasion, anti-aircraft shrapnel missed Ken’s head by two inches. After completing a tour of thirty operations, most of Ken’s crew volunteered for a second tour. Transferred to 9 Squadron, many of his fifteen operations involved dropping the 12,000 lb Tallboy bomb. Ken describes the differences between the rear and mid-upper turrets including their armament. After the war, he served as an RAF driver in Egypt before being demobilised and returning to civilian life. He volunteered with the Royal Observer Corps for a couple of years.