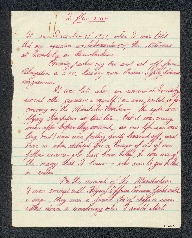 Mentions time as a balloon operator at Felixstowe and then training as an air gunner. First tour on 50 Squadron RAF Swinderby on Manchesters, but had to wait for aircraft to arrive as squadron still flying Hampden when he arrived later transferred to Lancaster. First operation Gardening off St Nazaire. Mentions first 1000 bomber peration and story of Leslie Manser VC. Lists operations on first tour including Guy Gibson and daylight operation to Le Creusot. Story of last trip on first tour to Hamburg on 9 November 1942- some crew wounded and killed. crash landed on return. Posted to 44 Squadron for second tour and later to 630 Squadron, Lists operations and events. Mentions Leonard Cheshire led attack on Munich and his award of Distinguished Flying Medal. Mentions post war events and 50 Squadron reunions. Many mentions of crew and colleagues as well as losses.