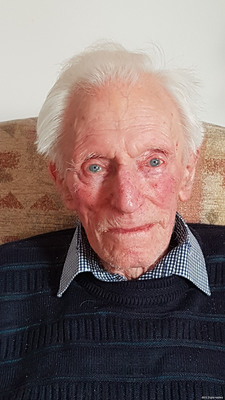 Tony lived in South Pool before moving to Liverpool with his job in a bank. He also belonged the Air Training Corps. After about a year he decided to sign up for the Royal Air Force. His assessment and medical were at Liverpool. He was called up to in November 1943. He then went to the initial training wing at RAF Bridlington for six weeks, before going to RAF Weston-Super-mare to train on Lancasters and Halifaxes. He was then posted to RAF St Athan for about ten weeks before being posted to RAF Scampton and finally to RAF Swinderby working on Stirlings as a flight engineer. It was there where he met the rest of the crew. After Lancaster finishing school he went to RAF Tuddenham and joined 90 Squadron. From there their first operation was to Siegen. He did some formation flying on some of the raids. Later he joined 7 Squadron on Pathfinders. During this time, he remembered an incident involving his motorbike which he lent to a colleague who had an accident with a police car. The bike had to be written off - tony had only ridden it once. The crew then went back to RAF Tuddenham where they took part in operations Manna and Exodus.
Tony was posted to RAF Valley and then went by sea to Iraq driving lorries. The crew sailed back to Liverpool and went to RAF Burtonwood. After being demobbed he went back to banking in Liverpool until he retired.