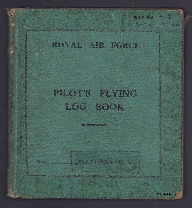 [Underlined] ADDITONAL DETAILS RELEVANT TO BERLIN OPERATIONS RECORDED ON THIS AND OTHER ADDED PAGES ARE TAKEN FROM ALAN W. COOPERS’ BOOK “BOMBERS OVER BERLIN” FIRST PUBLISHED IN 1985 AND SUB TITLED “THE RAF OFFENSIVE NOV 43 – MAR ’44. [/underlined]

[Underlined] 2/3rd Jan (10th Raid) [/underlined] All available on snow clearing prior to T/O. 383 a/c but 72 returned early due to mistaken recall signal. Route out over Southwold to north of Δ and back slightly south of outward route. Heavy flak over Berlin. 27 lost.

[Underlined] 20/21 Jan (11th Raid and heaviest so far). [/underlined] 769 a/c. on northerly route out over Kiel canal, then between Hamburg and Lϋbeck and landfall over Schleswig-Holstein heading south for Berlin. Weather similar to forecast of 10/10th cloud over Δ and fine on return. 2400 tons dropped causing widespread damage, over 700 casualties and 10,000 homeless. 35 a/c lost (13 Lancs, 22 Halifax), 18 known due to fighter attack and 8 to flak damage.

[Underlined] 28/29th Jan (13th Raid [/underlined] & slightly unlucky for us although we didn’t realise it at the time). Total of 682 a/c inc 432 Lancs. T/o around midnight. Route out past Heligoland & over Denmark, then SE to Δ and return same way. Considerable Flak reported & losses 43. Considered a most effective raid with fires & explosions seen from beyond Baltic coast.

[Underlined] 15/16th Feb(15th Raid) [/underlined] Total of 891 a/c (including 561 Lancs, 314 Halifax & 16 Mosquitoes), the largest force ever despatched to the ‘Big City’, plus 24 Lancs to Frankfurt and Mosquito attacks on 7 night fighter airfields. T/O between 5 & 6pm with return about midnight for a northerly route out over Denmark. Heavy flak experienced, particularly over enemy coast and the target. 42 a/c lost plus 4 crashed on return. 2642 tons dropped in 39 minutes.

816 aircraft took part – 620 Lancasters, 184 Halifaxes and 12 Mosquitoes. An indirect routes [sic] was used crossing the Dutch coast north of the Zuider Zee and then due south to Frankfurt. This, and a minelaying diversion at Kiel, confused the Germans for quite some time. Hannover being forecast as the main target. A few fighters eventually found the Bombers.

The marking and bombing was accurate and damage being more severe than in the raid 4 nights previous. There was severe damage to the industrial areas along the main road to Mainz. All parts of the city were hit but the full force of the attack fell in the districts to the west.

162 B-17s of the Eighth Air Force used Frankfurt as a secondary target when they could not reach Schweinfurt 36 hours after this RAF raid, further damage was caused.

The three raids of the 18th, 22nd and 24th March were carried out by a combined plan of the British and American air forces and their combined effect was to deal the worst and most fateful blow of the war to Frankfurt.

[Obscured text] concentrated between 10.25 and 10.43pm, but it started early and spread over an hour and many early aircraft (including mine) overshot the target on the first run and had to go round again, while others, even earlier, had to orbit & await the TI’s. The scatter caused by the wind broadened the stream from the planned few miles to 180 miles at the Baltic coast & resulted in many aircraft flying over defended areas. Losses were high at 72 (8.9%), of which at least 45 were due to flak, plus 5 crashed on return.

[Underlined] 24/25th March (16th + final raid [/underlined] of the “Battle of Berlin” and the last large scale attack by BC.) This raid was delayed from 21st Mar by unsuitable weather. 811 a/c took part with 147 other from OUT’s on diversions. Weather was forecast as variable medium cloud with clear skies above and light northerly winds. In fact, winds were over 100mph from the north and this was not appreciated until late on, if at all with the result that navigation went hay-wire and aircraft were, literally, as newspaper headlines recorded the next day, but with a different meaning, “out all over Germany”. The route ran down to Berlin from the NW and the attack was planned to be concentrated between 10.25 and 10.43pm, but it started early and spread over an hour and many early aircraft (including mine) overshot the target on the first run and had to go round again, while others, even earlier, had to orbit & await the TI’s. The scatter caused by the wind broadened the stream from the planned few miles to 180 miles at the Baltic coast & resulted in many aircraft flying over defended areas. Losses were high at 72 (8.9%), of which at least 45 were due to flak, plus 5 crashed on return.

The aircraft was then put on disposal until ATA pilot [obscured] it to deliver to the squadron. The Erks got a shock when [obscured] women collected these planes and flew them as good as any male pilot.

Then one day, we were all hauled out to put the black and white stripes on our aircraft. We were all half asleep slapping the paint on the wings and tail ends, ready for the invasion of France.

We were allowed knitting wool without coupons in air force blue – good job mum was a good knitter as she knitted me stockings to wear under the battle dress, jumpers and gloves which I could wear whilst filling the aircraft. Also a balaclava to keep my cars [sic] warm.

Aircraft in disposal were often covered in snow when ATA come to collect, which meant you used a rope one each side of the wing and tired [sic] to pull it to the win [sic] tip. It makes me shiver now to think how we coped with the winters in Scotland.

Having to fly with the aircraft you signed for and serviced. We lost 3 airmen from our site which were shot down over the North Sea. Thank god us girls all survived flying.

Getting back from the airfield one day we had a notice telling us we were being moved again. We gathered all our gear and

The night became known in Bomber Command as ‘the night of the strong winds’. At every stage of the flight a powerful wind from the north carried Bombers south. This wind was not forecast accurately and it was so strong that various methods available to warn crews of wind change during the flight failed to detect the full strength of it. The Bomber stream became very scattered, particularly on the home flight and Radar-predicted Flak batteries at many places were able to score successes. Some of the Bomber force even strayed over the Ruhr defences on the return flight. Approximately 50 of the 72 aircraft lost were destroyed by Flak, most of the remainder being victims of night fighters. A Berlin report says that 14 Bombers were shot down by fighters in the target area.

The strong winds caused difficulties in the marking at Berlin with markers being carried beyond the target to the south west of the city. 126 small towns and villages outside Berlin recorded bombs. The majority of the damage in Berlin was in south western districts.

No industrial concerns were classed as destroyed but several important ones damaged. 5 military establishments were hit badly including the depot on the Waffen-SS. Leibstandarte Adolf Hitler Division in Lichterfelde.

This was the last major RAF raid on Berlin during the war, but the city was to be bombed many times by small forces of Mosquitoes.

Details of the Berlin Raid from the Bomber Command War Diaries by Martin Middlebrook and Chris Everitt.