20 items. The collection concerns Wing Commander Ronald Mathers DFC (55201 Royal Air Force) and consists of his log books, photographs, correspondence, his decorations, and copies of two letters from Dwight Eisenhower to Sir Arthur Harris. Ronald Mathers completed a tour of operations as a pilot with 9 Squadron from RAF Bardney. After the war he took part in victory flypasts and a Goodwill tour of the United States with 35 Squadron. The collection also contains a scrapbook of the Goodwill Tour to the United States.

The collection has been loaned to the IBCC Digital Archive for digitisation by Heidi Peace and Ingrid Peters, and catalogued by Barry Hunter. 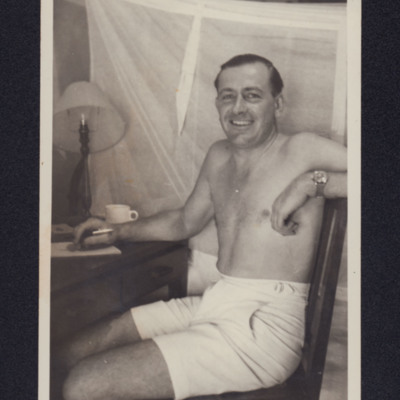 Ron Mathers seated by a desk. He is wearing shorts and no top. On the desk is a lamp and a cup. On the reverse 'September 1954 Abu Sueir, Taken by Jock one afternoon last week. Tea was "up" and I was just starting a letter to my "ever loving". That's… 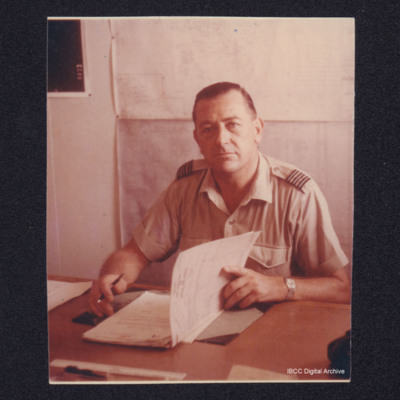 Ron Mathers sitting at a desk.working on a document. He is wearing tropical airman's uniform with the rank of Wing Commander.

Six airmen and a Lancaster 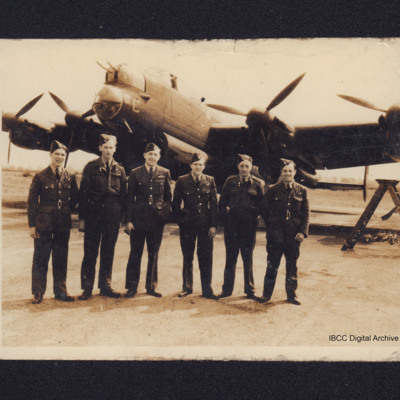 Six airmen wearing side caps are standing in front of a Lancaster. On the reverse they are identified as 'Jock Rear Gunner, Tom Navigator, Me Skipper, Al Engineer, Paddy Mid-upper Gunner Jock Wireless Operator'. 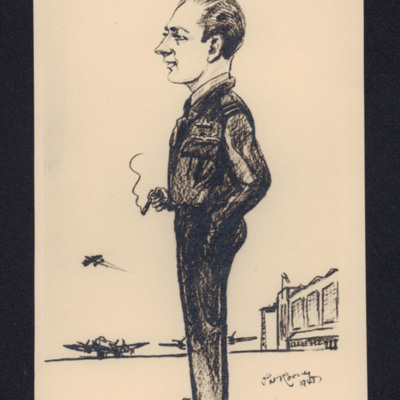 A caricature side view of Ron Mathers standing looking at Lancasters. It is signed by Pat Rooney and dated 1945. 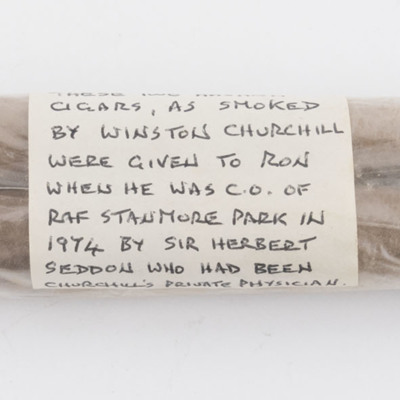 A packet of cigars annotated 'Cigars, as smoked by Winston Churchill were given to Ron when he was C.O. of RAF Stanmore Park in 1974 by Sir Herbert Seddon who had been Churchill's private physician'.

No 35 Squadron (B) (Madras Presidency) Squadron 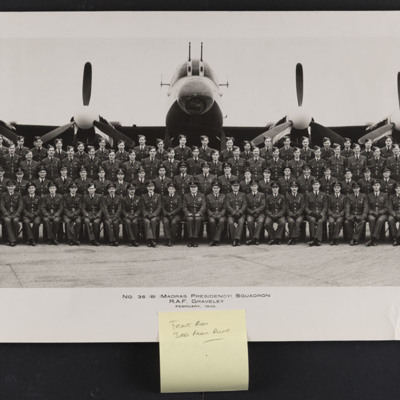 Four rows of airmen arranged in front of a Lancaster. It is captioned 'No 35 Squadron (B) (Madras Presidency) Squadron R.A.F. Graveley February 1946.' Ron Mathers is front row third from the right.

Lancaster 'C for Charlie' over London 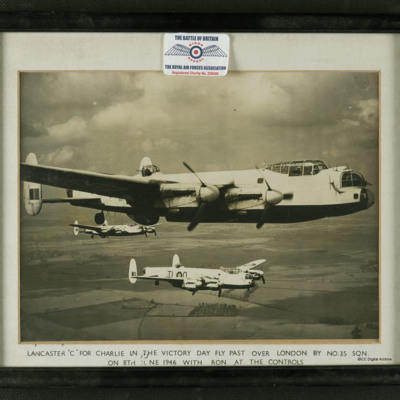 An air-to-air photograph of three Lancasters captioned 'Lancaster "C" for Charlie in the Victory Day Fly Past over London by 35 Sqn on 8th June 1946 with Ron at the controls'. 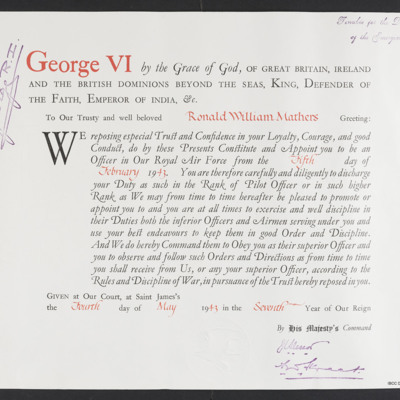 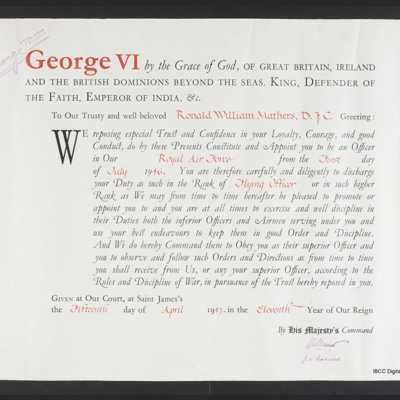 Lancaster over the Mall 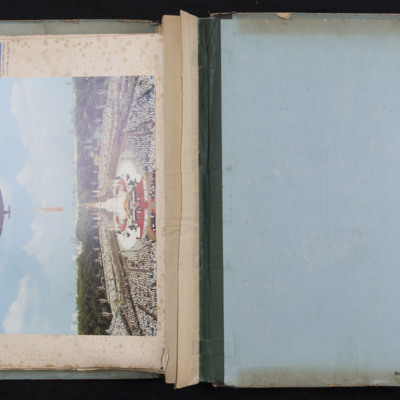 A Lancaster drops poppies over the Victoria Memorial at the end of the Mall. It is captioned '50th Anniversary of VJ day 1995' and has a commemorative stamp 'Lancaster' stamp issued in June 97. 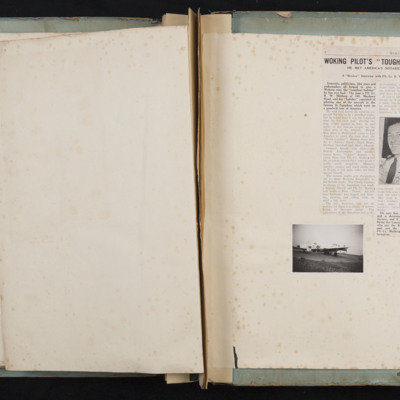 Item 1 is a newspaper cutting about Ron Mathers' trip to the United States.
Item 2 is a photograph of a Lancaster 'TL-C' on the ground. 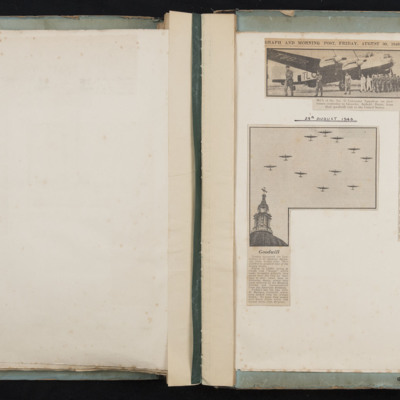 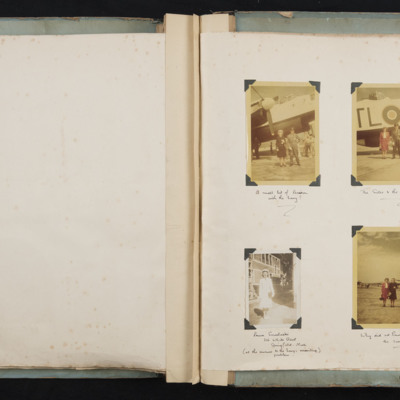 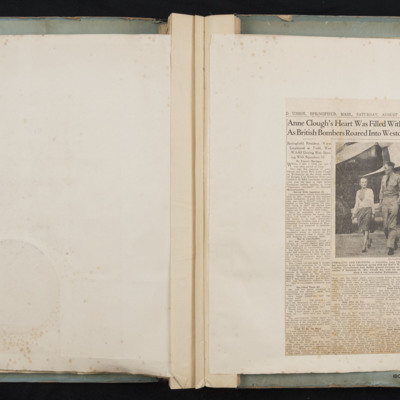 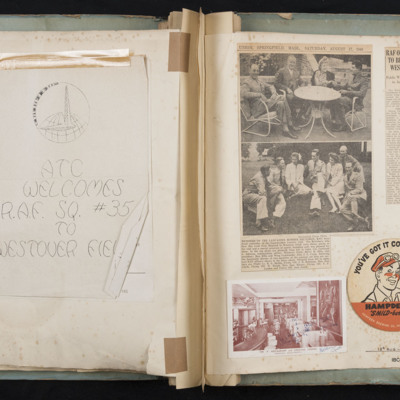 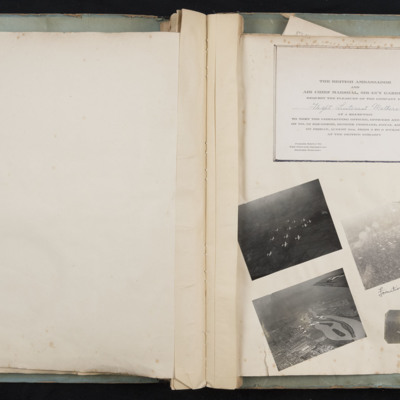 Item 1 is a formal invitation to Flight Lieutenant Mathers to attend a reception at the British Embassy.
Items 2, 3, 4 and 5 are air-to-air view s of 12 Lancasters over Washington captioned 'Formation over the "White House"' 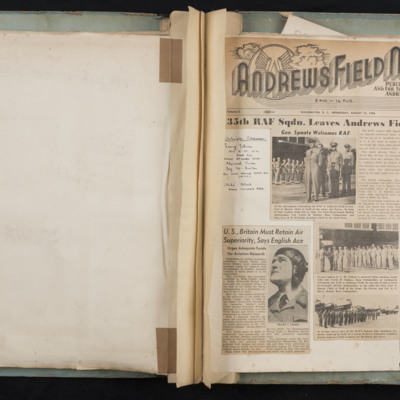 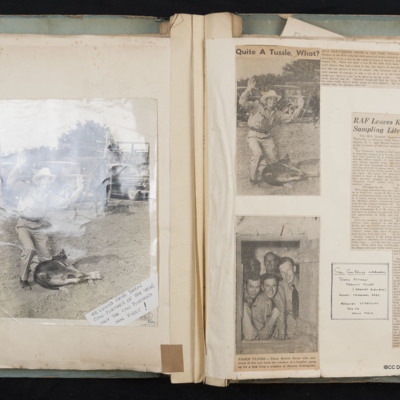 Item 1 is a photograph of Ronald Mathers wearing a cowboy hat with a calf at his feet, behind are cars. It is captioned 'He would have been cow puncher of the year only the cow punched him first!'
Item 2 is a newspaper cutting with the same… 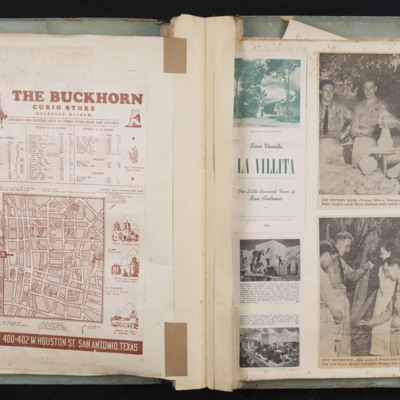 Item 1 is a leaflet about The Buckthorn Curio Store (Buckhorn Museum)
Item 2 is a leaflet about La Villita, the little Spanish town of San Antonio.
Item 3 is a photograph of a building, captioned 'Spanish Governor's Palace'.
Item 4 is a street… 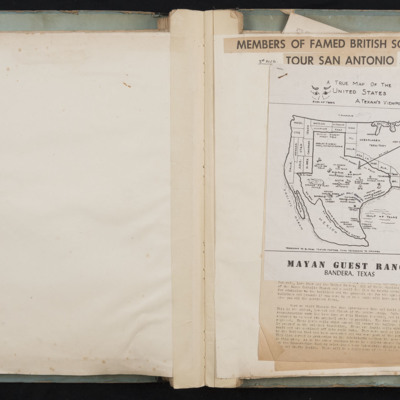 A sketch map of Texas showing the state disproportionately large, captioned Mayan Guest Ranch, Bandera, Texas. Underneath is text referring to points of interest in San Antonio and missions within the state. 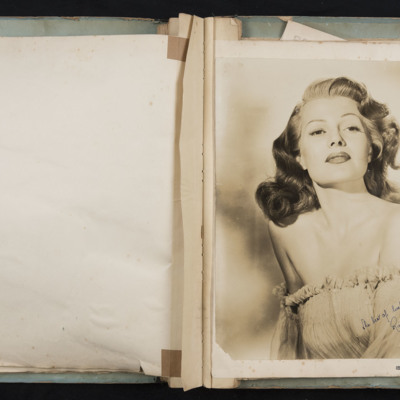 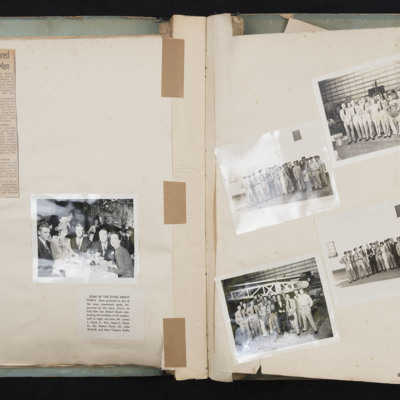 Item 1 is a newspaper cutting about the airmen visiting studios and recreation centres.
Item 2 is a photograph of three men and two women, captioned 'Some of the stars about town'.
Item 3, 4, 5 and 6 are photographs of several airmen standing with… 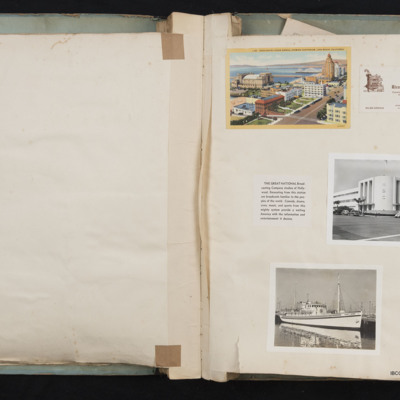