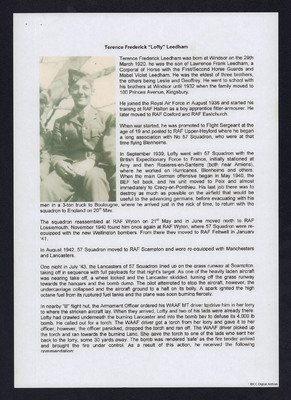 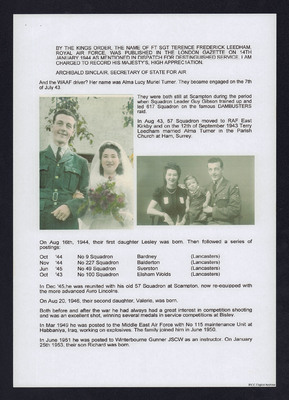 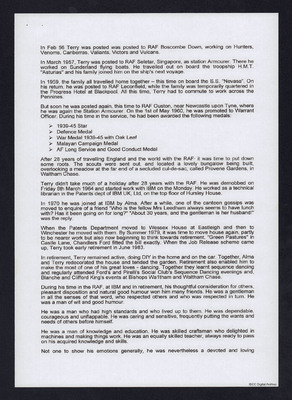 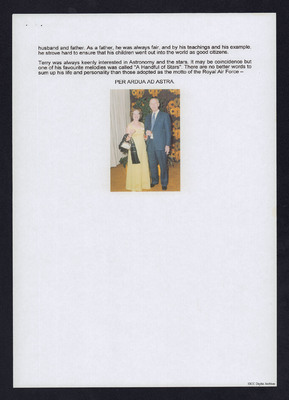 Top left first page - three-quarter length portrait of an airman wearing tunic and side cap. Text notes that he joined Royal Air Force in 1936 as a Halton apprentice armourer. Promoted to flight sergeant at the beginning of the war he began a long association with 57 Squadron then flying Blenheims as part of British Expeditionary Force in France followed by postings to RAFs Wyton and Lossiemouth. Subsequently served with 57 Squadron on Wellingtons at RAF Wyton and RAF Feltwell. He then moved to RAF Scampton where the squadron re-equipped with Manchester and then Lancaster. Relates meeting Alma Turner later Mrs Leedham during an ground incident concerning a burning fully loaded Lancaster after which he was mentioned in dispatches. Page 2 - Left middle a colour three-quarter length wedding portrait of a man wearing tunic next to a woman wearing wedding dress and holding a bouquet of flowers. Right middle a b/w family portrait of a woman in dark dress on the left, a child in the middle and a flight sergeant wearing tunic on the right. Text continues with subsequently served with 9, 227, 49 and 100 Squadrons and describes postwar career. Last page middle under text - full length colour portrait of a woman on left in yellow dress and a man in suit and tie on the right.

Terence Frederick Leedham was born at Windsor on the 29th March 1920. he [sic] was the son of Lawrence Frank Leedham, a Corporal of Horse with the First/Second Horse Guards and Mabel Violet Leedham. He was the eldest of three brothers, the others being Leslie and Geoffrey. He went to school with his brothers at Windsor until 1932 when the family moved to 100 Princes Avenue, Kingsbury.

He joined the Royal Air Force in August 1936 and started his training at RAF Halton as a boy apprentice fitter-armourer. He later moved to RAF Cosford and RAF Eastchurch.

When war started, he was promoted to Flight Sergeant at the age of 19 and posted to RAF Upper-Heyford where he began a long association with No 57 Squadron, who were at that time flying Blenheims.

In September 1939, Lofty went with 57 Squadron with the British Expeditionary Force to France, initially stationed at Amy and then Rosieres-en-Santerre (both near Amiens), where he worked on Hurricanes, Blenheims and others. When the main German offensive began in May 1940, the BEF fell back, and his unit moved to Poix and almost immediately to Crecy-en-Ponthieu. His last job there was to destroy as much as possible on the airfield that would be useful to the advancing germans, [sic] before evacuating with his men in a 3-ton truck to Boulougne, [sic] where he arrived just in the nick of time, to return with the squadron to England on 20th May.

The squadron reassembled at RAF Wyton on 21st May and in June moved north to RAF Lossiemouth. November 1940 found him once again at RAF Wyton, where 57 Squadron were re-equipped with the new Wellington bombers. From there they moved to RAF Feltwell in January '41.

In nearby “B” flight hut, the Armament Officer ordered his WAAF MT driver to drive him in her lorry to where the stricken aircraft lay, [sic] When they arrived, Lofty and two of his lads were already there. Lofty had crawled underneath the burning Lancaster and into the bomb bay to defuse its 4,000 lb bomb. He called out for a torch. The WAAF driver got a torch from her lorry and gave it to her officer; however, the officer panicked, dropped the torch and ran off. The WAAF driver picked up the torch and ran towards the burning Lanc. She gave the torch to one of the lads who sent her back to the lorry, some 30 yards away. The bomb was rendered 'safe' as the fire tender arrived and brought the fire under control. As a result of this action, he received the following commendation:

BY THE KINGS ORDER, THE NAME OF FT SGT TERENCE FREDERICK LEEDHAM, ROYAL AIR FORCE, WAS PUBLISHED IN THE LONDON GAZETTE ON 14TH JANUARY 1944 AS MENTIONED IN DISPATCH FOR DESTINGUISHED SERVICE. I AM CHARGED TO RECORD HIS MAJESTY'S, HIGH APPREC1ATION [sic].

They were both still at Scampton during the period when Squadron Leader Guy Gibson trained up and led 617 Squadron on the famous DAMBUSTERS raid.

In Dec '45, he was reunited with his old 57 Squadron at Scampton, now re-equipped with the more advanced Avro Lincolns.

In June 1951 he was posted to Winterbourne Gunner JSCW as an instructor. On January 25th 1953, their son Richard was born.

In Feb 56 Terry was posted was posted [sic] to RAF Boscombe Down, working on Hunters, Venoms, Canberras, Valiants, Victors and Vulcans.

In March 1957, Terry was posted to RAF Seletar, Singapore, as station Armourer. There he worked on Sunderland flying boats. He travelled out on board the troopship H.M.T. “Asturias” and his family joined him on the ship's next voyage.

In 1959, the family all travelled home together – this time on board the S.S. “Nevasa”. On his return, he was posted to RAF Leconfield, while the family was temporarily quartered in the Progress Hotel at Blackpool. All this time, Terry had to commute to work across the Pennines.

But soon he was posted again, this time to RAF Ouston, near Newcastle upon Tyne, where he was again the Station Armourer. On the 1st of May 1960, he was promoted to Warrant Officer. During his time in the service, he had been awarded the following medals:

After 28 years of travelling England and the world with the RAF it was time to put down some roots. The scouts were sent out, and located a lovely bungalow being built, overlooking a meadow at the far end of a secluded cul-de-sac, called Provene Gardens, in Waltham Chase.

Terry didn't take much of a holiday after 28 years with the RAF. He was demobbed on Friday 8th March 1964 and started work with IBM on the Monday. He worked as a technical librarian in the Patents dept of IBM UK, Ltd, on the top floor of Hursley House.

In 1970 he was joined at IBM by Alma. After a while, one of the canteen gossips was moved to enquire of a friend “Who is the fellow Mrs Leedham always seems to have lunch with? Has it been going on for long?” “About 30 years, and the gentleman is her husband!” was the reply.

When the Patents Department moved to Wessex House at Eastleigh and then to Winchester he moved with them. By Summer 1979, it was time to move house again, partly to be nearer work but also now beginning to think towards retirement. “Green Pastures” in Castle Lane, Chandlers Ford fitted the bill exactly. When the Job Release scheme came up, Terry took early retirement in June 1983.

In retirement, Terry remained active, doing DIY in the home and on the car. Together, Alma and Terry redecorated the house and tended the garden. Retirement also enabled him to make the most of one of his great loves – dancing. Together they learnt sequence dancing and regularly attended Ford's and Pirelli's Social Club's Sequence Dancing evenings and, Blanche and Clifford King's events at Bishops Wa1tham [sic] and Waltham Chase.

During his time in the RAF, at IBM and in retirement, his thoughtful consideration for others, pleasant disposition and natural good humour won him many friends. He was a gentleman in all the senses of that word, who respected others and who was respected in turn. He was a man of wit and good humour.

He was a man of knowledge and education. He was a skilled craftsman who delighted in machines and making things work. He was an equally skilled teacher, always ready to pass on his acquired knowledge and skills.

Not one to show his emotions generally, he was nevertheless a devoted and loving

husband and father. As a father, he was always fair, and by his teachings and his example, he strove hard to ensure that his children went out into the world as good citizens.

Terry was always keenly interested in Astronomy and the stars. It may be coincidence but one of his favourite melodies was called “A Handful of Stars”. There are no better words to sum up his life and personality than those adopted as the motto of the Royal Air Force –