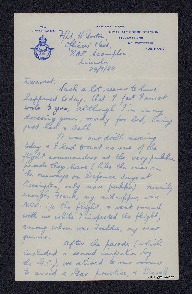 He writes of his promotion to flight lieutenant and his duties on parade.

TEL. SILVERSTONE 252
OFFICERS’ MESS,
ROYAL AIR FORCE STATION,
SILVERSTONE,
NR. TOWCESTER,
NORTHANTS.
F/Lt H Gorton,
Officers’ Mess,
R.A.F. Scampton,
Lincoln.
[Royal Air Force crest]
24/5/44
Dearest,
Such a lot seems to have happened today, that I feel I must write to you, although I’m in my dressing gown, ready for bed, having just had a bath.
It was our drill morning today & I had to act as one of the flight commanders at the very pukka parade they have (like the ones on the runways on Defence days at Ossington, only more pukka). Funnily enough, Frank, my mid-upper, was N.C.O. i/c the flight, & went round with me while I inspected the flight, among whom was Freddie, my rear gunner.
After the parade (which included a second inspection by the G.C.), we retired to our rooms to avoid a Gas practice, & Derek
[page break]
2
& I stayed there instead of going to P.T.
On arrival at the Mess for lunch, I found your second letter, plus a letter from the Bank. They’ve received £1-5-1d, promotion pay Apr. 24-30, at 3/7d a day. They couldn’t give me the gazette number so instead, they enclosed the actual slip they had received from Cox & Kings, the R.A.F. bankers. I thought it was jolly decent of them, don’t you.
After lunch I went to be inoculated, & then went to see the Adj. about my putting up my second ring. He was a bit doubtful at first, as I hadn’t seen the Gazette, but after making a couple of phone calls, including one to Swinderby, he finally discovered that it was O.K. When I got back to my billet I borrowed
[page break]
3
Derek’s needle & cotton & sewed another bit of braid on my battledress. My great-coat & second tunic I am leaving to the station tailor.
I also discovered from the Adjutant that I am fairly certain to go from here a fortnight today – June 7th, & I shall go to Wigsley, the least accessible of the three.
That means I shall get a 48 next week – June 2nd & 3rd, getting away at lunch time in the 1st. What shall we do about it? I should think that Birmingham or London would be the best places to stay in – I assume you don’t want me to go to Newhouse,
[page break]
4
apart from the fact that it would take me so long to travel there, and I don’t think you want to come as far as Lincoln or Nottingham (even if I could get accommodation, which is very unlikely).
You ought to get this letter on Saturday, so that I ought to be able to get a reply by Monday or Tuesday, letting me know where you’d like to stay.
If you can’t get away from Newhouse, I’ll go there if you like, or if you can’t manage me there, I could stay in Aber & see you in the day time. I’ll go home to Farnworth [underlined] if you insist [/underlined], but only if, because I so much want to see you again.
[page break]
5
I was going to reply to the letter I got this morning, but the time is late & I am cold. Remember, darling, you are only to write when it is convenient. I write to you partly because I’ve lots of time, but mainly because I enjoy it, - it’s the next best thing to speaking to you, but I don’t want you to reply to every letter
All my love, darling,
Harold.