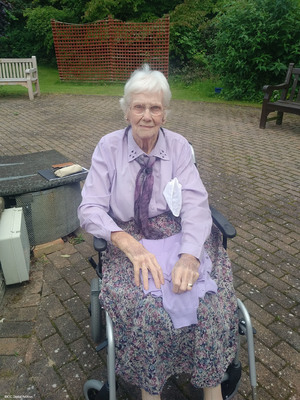 Bettie was born in Wakefield. The family moved to Doncaster when she was eleven and at 21 she joined the Auxiliary Territorial Service. While in Doncaster she helped at the YMCA café as part of the war effort and that is where she met and married Jim, who was in Bomber Command.
After training in York, Bettie was promoted to corporal and became a wireless operator. Following her posting to Trowbridge in Somerset she then went to the War Office Training Board in Leeds and then back to her unit on the Isle of Man. She was due to begin training for a commission when she became pregnant. Jim was posted to South Africa as a wireless operator and on his return became a pilot. Jim did 54 operations with Bomber Command.
Bettie lived in Doncaster with her parents when she had her first child, while Jim was away bringing prisoners of war back home. He was demobbed during that time and went back working for BP. Bettie and Jim lived in Stanwell for 18 months before moving to Nottingham for Jim’s work. He was promoted to administrative Director for BP at the refinery in Scotland. After spending time in Scotland they moved back to Purley, London. Jim left BP and worked for an American company in England until his retirement. The family then lived in Dorset, Minorca and finally Lincoln.