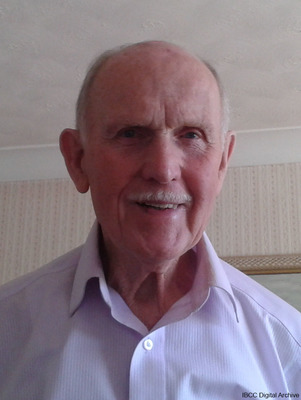 Tom Marchant had always wanted to fly and at eighteen joined the RAF as a Wireless Operator Air Gunner but was remustered as Flight Engineer after his initial postings to Warrington and Squires Gate Airfield, Blackpool. He describes his very first flight in an Anson aircraft from Blackpool. His next posting was to St Athan where he passed out as a Flight Engineer and was posted to an Operational Training Unit at Dishforth in Yorkshire where he flew in Halifax and Lancaster aircraft and met the crew he would fly with. On completion of the OTU he and his crew were posted to 101 Squadron based at RAF Ludford Magna where they completed a number of bombing operations over Germany. The crew successfully volunteered for Pathfinder duties and had to complete further training in navigation and cross country flying. On these training sorties he actually flew a Lancaster.
On completion of operations Tom went onto instruct dinghy drill at RAF Lossiemouth in Scotland and from there went on to join Transport Command flying Halifax aircraft. After the war he left the RAF but continued to fly gliders and motor gliders from Salby (ex USAF bomber station) near Grantham. He eventually went on to gain his Private Pilots License.