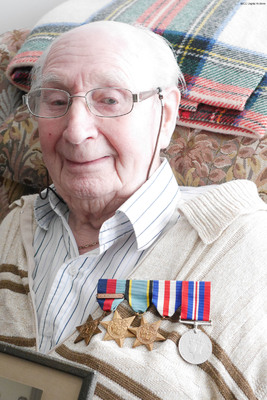 Ronald Marlow went to Middleton Council School, then worked at Forgrove Engineering. He joined the Air Training Corps, volunteered for the Royal Air Force training in London at St Johns Wood. He became an air gunner ad flew Wellingtons, followed by a post to Heavy Conversion Unit. Ronald was sent to 50 Squadron at RAF Skellingthorpe where he flew Lancasters on night and daytime operations in France during the Normandy campaign. After 32 operations as a rear gunner he was sent to gunnery instruction, crashing with a Wellington into woods near RAF Market Harborough. At RAF Driffield (466 Squadron) he served with Albert Hollings flying in Halifaxes Mk 3 as a mid-upper gunner. He carried out operations in Germany to Wiesbaden and Stuttgart. When demobbed he moved to Lytham St. Anne's and Blackpool. Ronald discusses operation cancellations with return to base, flights and preparation, reasons for joining, volunteering, crewing up, service and off-duty life, secrecy, mascots, rank structure, military service condition (temperature at high altitude and heated gloves), military discipline, anti-aircraft guns, aircraft damage during operations, searchlights, memorials, decorations, Bomber Command recognition and reunions.