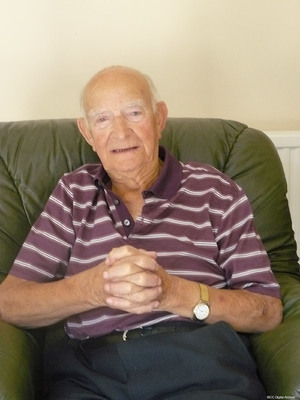 Frank Mannion was born in Manchester. When he completed his electrical engineering apprenticeship at Metropolitan Vickers he volunteered for the RAF. Initially he was ready to train as a pilot but was told there was a shortage of air gunners so he volunteered for that role instead. After training Frank and his crew were posted to 10 Squadron at RAF Melbourne. He was shot down on his thirty seventh operation. Frank managed to finally free himself from his badly damaged turret and he baled out. He severely damaged his leg and he was found and taken prisoner. While he was being taken to prison there was an air raid and he had to share a shelter with the local population. He was sent to Stalag Luft VII at Bankau and then four months later was forced on the Long March. He and his navigator escaped from Luckenwalde and the Russians and were picked up by the Americans before he was repatriated home.