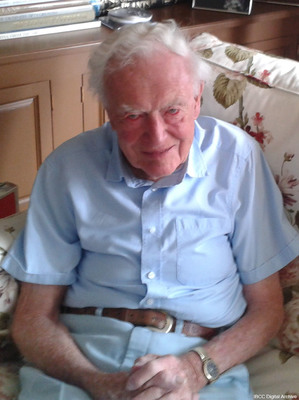 Maurice Hatch was training as a chartered accountant when volunteered for pilot but was instead enlisted as a navigator. After initial training at Torquay, Brighton and Eastbourne he went to South Africa for a year. Upon returning he crewed up at Harrogate followed to a post at RAF East Kirby (630 Squadron) flying Wellingtons, Stirlings and Lancasters, mainly on operations to Berlin. Then he went on a five-week intensive Pathfinder navigation training at 8 Group headquarters, followed by a post with 97 Squadron at RAF Coningsby where he flew 44 operations. After the end of the war in Europe he was sent to the Far East with the Tiger Force as wing navigation officer, but the war ended before he started operational duties. Maurice returned at RAF Coningsby as station navigation officer until demobbed. He then became a qualified chartered accountant and a partner of his firm. Maurice talks about military ethos, prisoner of war, bailing out, operations, anti-aircraft fire, evasive manoeuvres, Guy Gibson, reunions, the Bomber Command memorial in Green Park, meeting the Queen and other dignitaries.