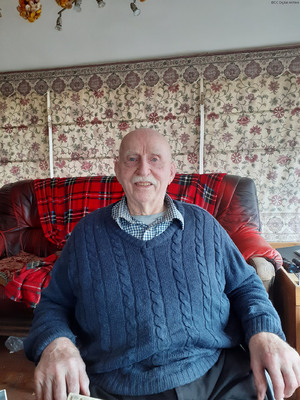 Keith was five at the start of the war and lived in a farm adjoining the airfield at RAF Skellingthorpe. He describes the airfield and how the trees were cut down in the farm belt. The airfield was closed soon after the war, bought by the City Council and was later turned into the Birchwood housing estate in the mid-1960s.

Keith recalls preparations for war as well as the many aircraft he observed before, during and after the war (Blenheims, Oxfords, Lightnings, Vampires, Meteors, Sterlings and Lancasters). On D-Day Keith witnessed, from the playground at Doddington School, some of the C-47s towing gliders on their way to France.

There were four separate wartime crashes: a Hampden, a Wellington, a Manchester and a Lancaster. A low-flying Ju 88 was also shot down by fighters. Incendiary bombs were dropped at the bottom of the farm. Keith also recollects the impact of two time-bombs.

There were very bad snowstorms in 1947. Life was hard on the farm during the war and the work was all manual, picking potatoes and sugar beet. Some German prisoners of war, stationed at Waterloo Lane in Skellingthorpe, helped to pick potatoes. In 1952 the farm acquired electricity and mains water although they still used the hand pump for drinking water. Keith had success in some thatching competitions. He eventually owned the farm, which became increasingly mechanised. Keith increased yields through experimentation, having particular success with strawberries.