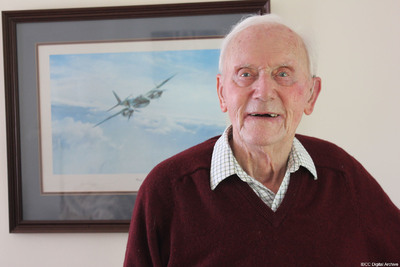 Squadron Leader Eric Taylor joined the Royal Air Force in 1942 and served as a navigator. He served in North Africa and completed a tour of operations against targets in Italy before becoming an instructor in England. He describes the differences in instrumentation between the North African and English aircraft, such as the Gee navigational aid. He flew nuisance and diversion operations in Mosquitos over places such as Wurzburg, Erfurt and Berlin thirteen times. He was involved in the Berlin Airlift and then spent a couple of years serving in Aden and the Middle East, and remained in the Air Force until 1978 when he retired as a squadron leader.