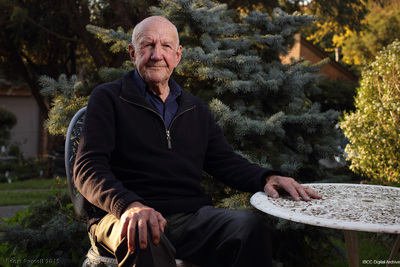 Ernest Cutts was born in Mallee in Victoria and at the age of fifteen he passed the Commonwealth Public Service Exam, joining the Military Post Office as a civilian junior postal officer. At eighteen he enlisted in the Royal Australian Air Force and went to 1 Recruit Training School at Summers and then to 3 Bombing and Gunnery School at West Sale, training as a rear gunner. He then sailed from Sydney to Great Britain, landing in Scotland and travelling to Brighton. He was posted to 27 Operational Training Unit and then to RAF Driffield, flying Halifax's. He took part in 34 operations over Germany. On one operation, his aircraft was so badly damaged by anti-aircraft fire that it was unable to return to its own station. In September 1945 he took part in Operation Spasm and Operation Dodge, repatriating prisoners of war from Europe and the Middle East. Subsequently he returned to Brighton en route for Australia. He remembers that the British people treated the personnel of Bomber Command very well and he felt proud to have been part of it.