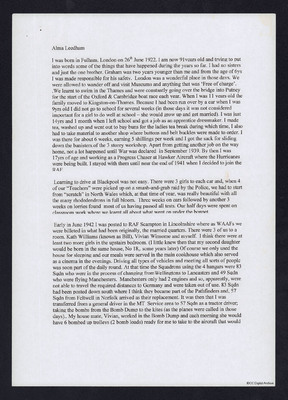 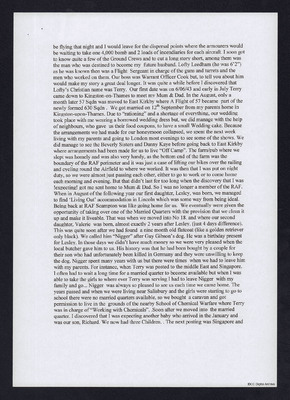 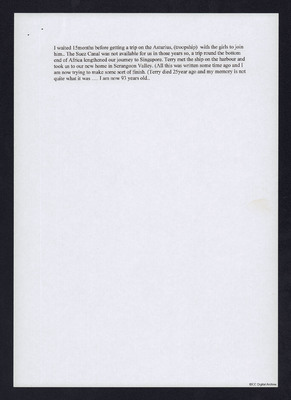 Tells of early life in London, joining the Woman's Auxiliary Air Force in 1941 and training as a driver. Relates experiences at RAF Scampton and then with 57 Squadron as a tractor driver pulling bomb trolleys. Subsequently went to East Kirkby. Married Terence Leedham who was an armourer on 57 Squadron in late 1943. Left the Woman's Auxiliary Air Force on expecting her first child. Continues with family history at RAF Scampton and postings to the middle east and Singapore.

I was born in Fulham, London on 26th June 1922. I am now 91 years old and trying to put into words some of the things that have happened during the years so far. I had no sisters and just one brother. Graham was two years younger than me and from the age of 6ys I was made responsible for his safety. London was a wonderful place in those days. We were allowed to wander off and visit Museums and anything that was ‘Free of charge’.
.We [sic] learnt to swim in the Thames and were constantly going over the bridge into Putney for the start of the Oxford & Cambridge boat race each year. When I was 11 years old the family moved to Kingston-on-Thames. Because I had been run over by a car when I was 9yrs old I did not go to school for several weeks (in those days it was not considered important for a girl to do well at school – she would grow up and get married). I was just 14yrs and 1 month when I left school and got a job as an apprentice dressmaker. I made tea, washed up and went out to buy buns for the ladies tea break during which time, I also had to take material to another shop where buttons and belt buckles were made to order. I was there for about 6 weeks, earning 5 shillings per week and I got the sack for sliding down the banisters.of [sic] the 3 storey workshop. Apart from getting another job on the way home, not a lot happened until War was declared in September 1939. By then I was 17yrs of age and working as a Progress Chaser at Hawker Aircraft where the Hurricanes were being built. I stayed with them until near the end of 1941 when I decided to join the RAF

Learning to drive at Blackpool was not easy. There were 3 girls to each car and, when 4 of our ”Teachers” were picked up on a smash-and-grab raid by the Police, we had to start from “scratch” in North Wales which, at that time of year, was really beautiful with all the many rhodedendrons [sic] in full bloom. Three weeks on cars followed by another 3 weeks on lorries found most of us having passed all tests. Our half days were spent on classroom work where we learnt all about what went on under the bonnet