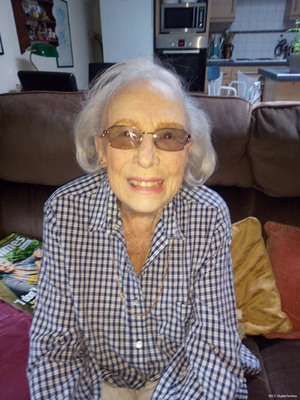 Pat Rumfitt was born in 1927 and experienced a privileged upbringing living in Kent as an only child before the war. She describes the resilient attitude to bombing in Bromley, walking to their flooded Anderson Shelter in her dressing gown and wellies, and evacuating only to return the following day after a near-miss. Rumfitt recalls her dissatisfaction with food rations and her parents acquiring chickens and a pig to ensure they had food, yet neither generating produce. She details her mother’s proactive involvement with The Red Cross and her caring nature for the pilots at RAF Biggin Hill. In 1941, at the age of 14, Rumfitt attended Bromley Arts School, where she was later offered a job with Tatler magazine and pursued commercial drawing in the fashion industry. She also visited Edinburgh with her mother in 1942, where she met Lister Harvey Arrowsmith, a flying officer based at RAF Bruntingthorpe. She married Arrowsmith in 1945, at which time, he had completed 26 operations and received the Distinguished Flying Cross. After the war, Rumfitt visited her husband’s home in Australia but strongly disliked the culture and filed for a divorce, which took six years to finalise. Finally, she describes her lifelong fondness for RAF Biggin Hill, and her mother remaining in touch with the officers that she cared for.