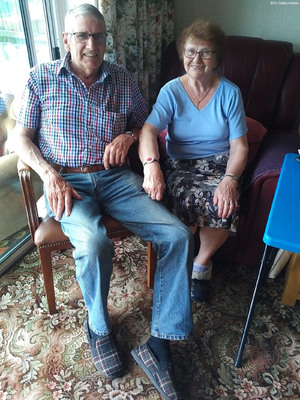 Helga (00:00-34:00) was born in Kiel in 1926. Her father was a sailor, who then worked at Krupp shipbuilding yard; her mother was a tram driver during the war. None of her brothers were called up, either because of age or disability. Mentions Hitler and daily life in pre-war Germany. While working on a farm she injured her back, was hospitalised, and then worked at a children hospital in Kiel which was bombed. Helga then met a Kriegsmarine serviceman and were going to get married. The train they were travelling on was attacked by an allied airplane which killed him but spared Helga. In 1947 Helga met Harold, a Royal Medical Corps paramedic who served in Kiel. They resettled in England and got married at Burton in 1948, an event which stirred much curiosity. Helga was welcomed by Harold’s family in Fieldby, and they also met Helga’s family in Germany. Harold worked at Scunthorpe steel works; she worked on a farm until retiring at 70. Harold passed away in 2000. Helga elaborates on the meaning of reconciliation, recalls the difficulties learning English and the reaction of villagers at her ‘lovely accent’.
Gordon (34:00-47:51) discusses family members emigrating to Canada and returning during the war. One served at 426 Squadron at RAF Linton on Ouse, a rear gunner on a Halifax who was lost in the North Sea. Gordon discusses his friendship with Harold and recollects seeing Bomber Command aircraft flying out and coming back during the war.