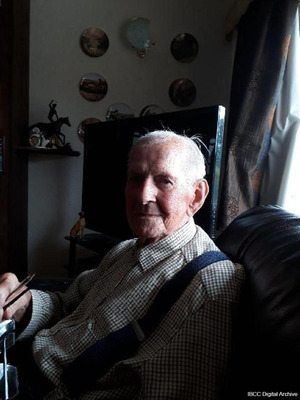 Tom was born in Stainforth, near Doncaster. His father and two brothers were miners. One of his sisters was in the Auxiliary Territorial Service and the other was a qualified nurse; she became a sister in Barnsley Hospital until she joined the Army. She then went to Germany and eventually to Burma before being made a major at Bombay hospital. Tom left school at fourteen and joined the Air Training Corps. A few months later he went to night school at the technical college, gained qualifications and went to work as a tool setter before volunteering for the Royal Air Force. He went to recruit in Sheffield and was given a job making 25lb shells. In about 1943 he received his call-up papers, and was posted at Rotherham, St. Andrews, London, Newquay and then to training at RAF Riccall as flight engineer. His Australian crew was at the Heavy Conversion Unit with 462 Squadron, then carried out carrying out nine operations. Tom married the week before the war ended and while on holiday his plane blew up on the runway, killing all the crew. At the end of the war Tom became a transport manager at RAF Scampton for about three months before being sent to northern Germany. He stayed at Braunschweig for five months on motor transport at a small airport. On returning to England he was demobbed and worked on a building site before moving to the steel works at Rotherham.