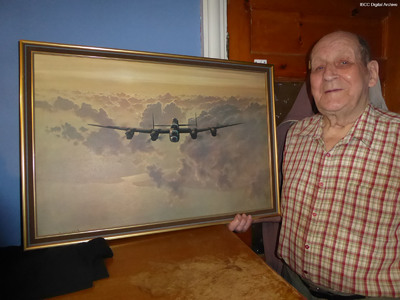 Albert was born in Aberdeenshire. Before the war he worked as an apprentice in an engineering firm. In 1943 he volunteered for the Royal Air Force, trained at London, Bridlington and Newquay before going for mechanical and engineering training. His final training was at RAF St Athan where many different aircraft flew in for maintenance. He joined his crew, which was mainly Canadian, at RAF Lindholme and their first flight was in a Halifax Mk 1. From there Albert went to the Lancaster Finishing School and then joined 170 Squadron at RAF Hemswell and began operations, the first being to Nuremberg. Whilst there the crew sometimes went to the Saracen’s Head in Lincoln or to the Monks Arms, the local pub.
Albert remembers operations to Dessau and Magdeburg. On one operation shrapnel caught them, there was a big flash and the aircraft filled with smoke. A crew member bailed out and was taken as a prisoner of war. The last two operations were to Heligoland and Bremen, and the crew were also involved in Operation Manna. At one point, Albert was accused of selling aircraft fuel as a million gallons had gone missing, but he was not charged. After completing another mechanics course Albert went to Gibraltar. From there he returned home to be demobbed. After the war Albert finished his apprenticeship in engineering and became a fitter and turner, eventually working for ICI in Northwich. He married a girl he had met while at Hemswell. Albert didn’t keep in touch with the crew but remembered a Simpson (pilot), Pete Jenkins (bomb aimer), Wally Pyle (navigator) and Bob Hayes (rear gunner).