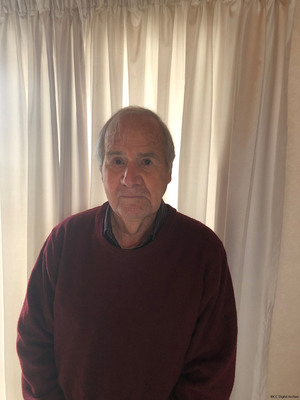 Ernest Davenport was born in Tattenhall, Cheshire in 1923. He joined the Local Defence Volunteers in 1940 and after witnessing the bombing of Merseyside he decided to join the RAF as a pilot. He was accepted into the Royal Air Force Volunteer Reserve and commenced flying training in July 1941 at EFTS at RAF Watchfield. He continued his training in the USA in 1942 and after a slight mishap on landing during a training flight he was sent to Canada for reselection as a navigator. He returned to the UK as a qualified observer which included navigation, bombing and gunnery. He was posted directly to 7 Squadron at RAF Oakington equipped with Stirling bombers, and was told on arrival by his CO, Wing Commander Mahaddie that he would be accepted providing he completed one satisfactory operation. On an operation to Krefeld his aeroplane suffered a fire and the crew were forced to bale out. After burying his parachute in enemy territory he eventually became a prisoner of war.