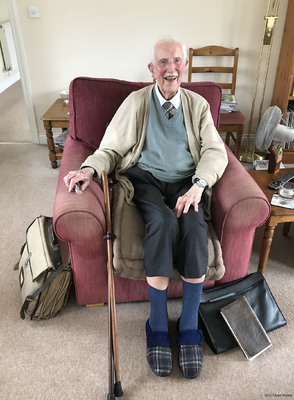 Bob Culpin worked for the civil service before joining the RAF in 1941. He was posted to Alabama for pilot training but was remustered and instead, completed a navigation course in Miami. When he returned to Great Britain, Culpin formed a mixed-nationality crew and trained on Wellingtons and Halifaxes. After joining 405 Squadron, they undertook coastal command patrols from RAF Beaulieu, before moving to RAF Gransden Lodge in 1943. He describes their role as ‘backers-up’ and ‘recentres’ during Pathfinder operations, the circumstances surrounding his promotion to navigation leader, and difficult trips to Hamburg and Peenemünde. Culpin's operational flying ended after he was injured in a car accident. After the war, he briefly returned to the civil service before re-joining the RAF until his retirement in 1976.