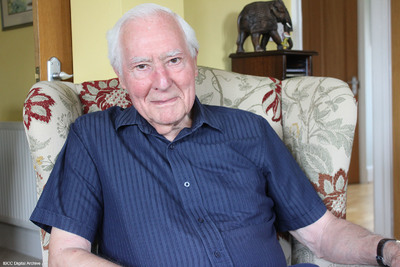 Originally working as a builder merchant, George Charles Culling’s town struggled constantly during the war due to the amount of bombing, which eventually forced his school to close. Finding an interest in navigation equipment, George joined the Air Training Corps and learned more about his interests, volunteering for the Royal Air Force at 18, believing it would be the most interesting thing to do at the time. Joining at a period during which the RAF recruited pilot and navigators together, George was sent to a training camp for several months, alongside other pilots, navigators and bomb aimers. However, he recalls a large loss of air gunners during his training and as such, many of his friends and fellow trainees were changed to air gunner training courses. George recounts his experience with navigation equipment and how much he enjoyed it. He names H2S and Gee, claiming that he had no idea what it stood for, nor how it worked exactly, simply stating that it was incredibly accurate. Initially training on the Isle of Man, George outlined his experience with the Anson and gives several pieces of information on the aircraft. He then recalled moving to RAF Swinderby for his Heavy Conversion Unit, explaining his experience with Wellingtons and Lancasters, praising the construction of the Wellington, making observations about its strengths and vulnerabilities. He also recalls the Lancasters being a great deal more comfortable than the Wellingtons. George continued into the Tiger Force unit following victory in Europe, giving information about his understanding of the plans for the Pacific. However, he felt relief when he heard the war was over, alongside confusion at what he would do next and joy at indefinite leave. He was called back in 1947, eventually joining a psychological test service, ending up in Japan. Looking back onto his career, he found a lot of enjoyment as a navigator. He joined the Bomber Command Association in the ’70s, finding a number of friends and joy throughout it.