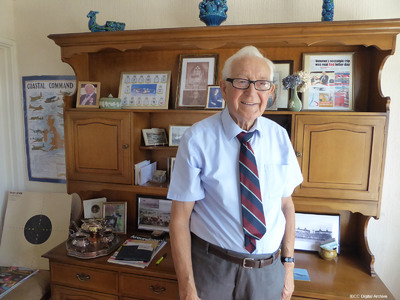 John Watkins was working in retail in Rotherham and in 1939 he joined 218 Squadron ATC. He joined the RAF in February 1942 at RAF Cardington, and did his initial training at Blackpool. In December 1942 he did his wireless training at RAF Yatesbury. His first role was as a ground personnel wireless operator at RAF Scampton in 1943. He next went to RAF Madeley to complete his aircrew training and then to 10 Gunnery School in Barrow in Furness. In early 1944 he went to the USA, via Canada. He was posted to 111 OTU in Nassau in the Bahamas to train on Liberator and Mitchell aircraft. On his return to the UK he converted to the Catalina and later the Sunderland flying boats. His original crew set off from Northern Ireland to fly to India, but due to a medical issue he didn’t fly with them and his crew were killed enroute. He finished his career flying on operations for Coastal Command in India and the Far East. He was personally upset by the condition of the ex-prisoners of war of the Japanese he and his crew ferried from bases.