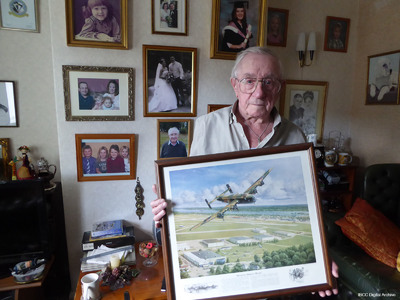 Bill Harvey was working in the mines before volunteering for the RAF. He knew that as a miner he was in a Reserved Occupation and he would only be able to leave the mine if he was to volunteer for aircrew. He was accepted and began his training. Rather than do the crewing up in the traditional way he was posted to RAF Lossiemouth to replace a gunner on a crew which was already established. When Bill was not back in camp on one occasion when an op was planned he was disciplined by being sent to the Corrections unit at Sheffield. After he had served that time he returned to the crew and to operational flying. When they returned from their last operation Bill describes the relief of surviving to being like having a cloak taken from his shoulders. After his operations he was posted back to Lossiemouth where he trained French aircrew. On one occasion he had the experience of having to rescue one his trainees who actually slipped and put his foot through the aircraft.