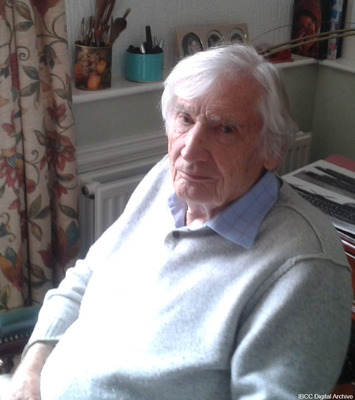 Kenneth Locke was born in 1923 and wanted to join the Royal Air Force, following in the footsteps of his father, who was a First World War Pilot.
Between leaving school and joining the Royal Air Force, Kenneth worked as a Bank Clerk, before signing up as aircrew when he was 18 years of age.
Kenneth tells of his time as a Leading Aircraftsman in Morecambe, training as an aircraft mechanic, before being posted to 97 Squadron in Bourne in 1943, and his first involvement with the Lancasters of the Pathfinder Squadron.
He tells of Black Thursday, a day of heavy losses for Bomber Command and how it affected him and his fellow ground crew.
Kenneth was then posted to 635 Squadron in March 1944, which was based at Downham Market in Norfolk where they conducted operations to assist the D-Day landings, and then was interviewed to become part of a Meteorological Air Corp team, to gather weather over the Atlantic.
Kenneth was promoted to Flight Sergeant at the end of his service with the Royal Air Force