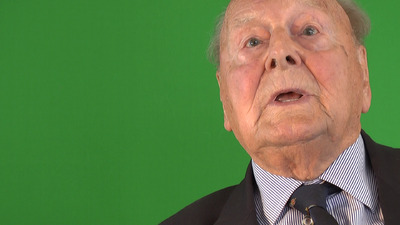 George was born at Whitstable and was 17 when war was declared. He joined the local Defence Volunteers which became the Home Guard. When he reached 18 he volunteered for air crew. He was interviewed at Chatham and sat an exam and selection board to train as a pilot. All of his training was in Canada and his first aircraft was a Tiger Moth. When he returned to England, he was posted to RAF Chipping Norton on Oxfords flying in black-out conditions. From there he was posted to RAF Lossiemouth, operational training unit on Wellingtons. He was then sent to a Heavy Conversion Unit at RAF Rufforth on Halifaxes. George was posted to 10 Squadron at RAF Melbourne. He flew operations to Essen, Kiel and Dortmund. On 17/18 August 1943, while based at RAF Holme-on-Spalding Moor, he took part on the bombing operation to Peenemünde rocket research station.