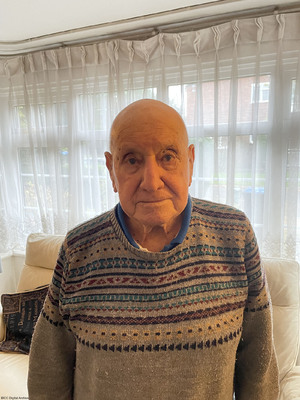 Monty grew up in Croydon and became an articled accountant in London before joining the RAF. Training at the Initial Training Wing in Torquay was followed by RAF Bishops Court in Northern Ireland and RAF Kinloss, which had a flight simulation room. He was then posted to RAF Rufforth in Yorkshire where he was introduced to the Halifax four-engined bomber, before going to 10 Squadron at RAF Melbourne. Monty describes his relatively experienced crew, including George Dark as pilot and Eric Barnard as rear gunner, who remained a close friend. He flew 21 trips with George and a further 11 operations with Flight Lieutenant Wood. The first outing was a ‘bullseye’, a flight where they entered Germany and then turned back to mislead the enemy. Briefings would include meteorological forecasts of wind and speed direction at varying heights up to the time of the target. He discusses how navigation was carried out and the use of navigation aids, such as Gee. Monty went on several operations to the Ruhr. He recounts how their aircraft had to divert to an American airbase at Knettishall in Suffolk, which flew B-17s. In another, they lost two engines yet successfully flew back to RAF Melbourne. Monty runs through a typical operations’ day, including the briefings and debriefings. He depicts how they would fly doglegs to confuse the enemy and the navigators would throw out packets of aluminium strips, code named Window. He goes on to describe his off-duty life, including trips to York and ‘Betty’s Bar’ (precursor of Bettys Tearooms) which had a mirror inscribed by aircrew in the basement. There were dances in the De Grey Rooms. Monty was a recipient of the Distinguished Flying Cross, which he believes was just because they were an experienced crew. Monty contrasts the American and RAF treatment of Lack of Moral Fibre. After his tour, Monty was sent to a number of RAF stations before being demobbed in 1946. He qualified as a chartered accountant, setting up his own accountancy practice. Monty finishes by discussing his attitude to the war and Bomber Command, and disappointment over the lack of recognition given to it.