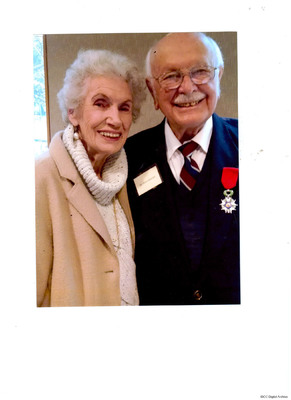 Peter Watson was born in South Wales and joined the Royal Air Force in 1943. He wanted to be a pilot but there was a surplus of pilots so he became an air gunner. He crewed-up and flew with 101 Squadron initially, a special duties squadron, and he explains they took an extra crew member who had radio equipment, Airborne Cigar, to interfere with German systems. He describes the first two flights being memorable; on the first night his aircraft was shot by a Focke-Wulf. On the second night, during a bombing trip to Schweinfurt the aircraft was coned by searchlights and was badly damaged by a shell and bomb being dropped from above. He also describes the squadron’s role in D-Day. He later transferred to 300 squadron, a Polish Squadron, to help train the Polish crews. He completed 33 operations. He describes the Operation Manna drops and Operation Exodus, picking up prisoners of war. He was eventually de-mobbed in 1947, by which time he was a Flight Lieutenant gunnery leader. He talks about the discomforts of flying but also the camaraderie of the crews and his distress at losing a crew. They didn’t return when they went on a flight without him. After being de-mobbed Peter returned to a job in engineering but emigrated to Australia in 1949 with his wife and baby.