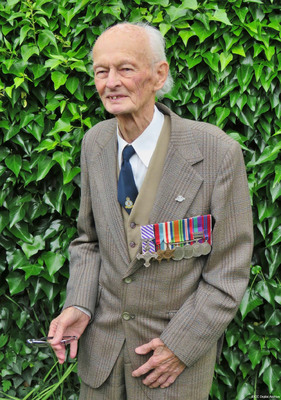 Ivon Warmington was working for the Post Office in his native Cornwall before he volunteered for the RAF. After pilot training he flew a tour of operations with 166 Squadron from RAF Kirmington. His first operation was to Mailly le Camp where the yellow ‘flares’ on the ground turned out to be burning Lancasters. He discusses the corkscrew manoeuvre. He had several near misses on operations when he felt he could just reach up and touch the other aircraft. After his first tour he went on to flying Mosquitos and ferrying passengers to and from the Nuremberg War Trials. He then became Personal Pilot to the Commander in Chief of the Far East Air Force. He emigrated to New Zealand where he continued to train other pilots.