Interview with Jan Black. One 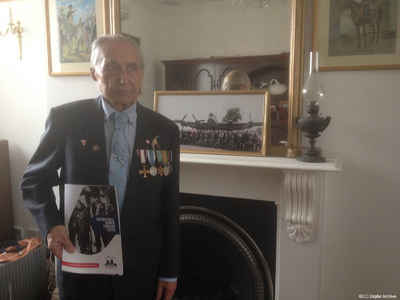 Interview with Jan Black. One

Jan Black flew operations as an air gunner with 300 Squadron. He was badly burned when his aircraft crashed on a training flight and he became a member of the Guinea Pig Club. He underwent ten operations at East Grinstead Hospital.

He describes his early life in Poland and Argentina; enlisting; training as an Air Gunner and being was posted to 18 OTU, RAF Bramcote; his plane crash and being burned.

Whilst on a return stay at hospital, the crew he had flown with were shot down on a bombing mission. After the end of the War, he spent three years at RAF Andover and then was demobbed at RAF Dunholme Lodge.

He talks about the relationships between Poland, Russia, Germany, Austria and England before, during and after the War. He talks about his opinions of Wellingtons and Lancasters and describes his first mission over Europe. He describes his crash landing again.

He talks again about his treatment and time in hospital and about his plane crash and mentions Archibald McIndoe. He describes taking photographs of aerial bombings; the German defence of targets and night fighting against Messerschmitt 109s.

He talks about shrapnel damage to aircraft; bomb drops; ‘Bomber Harris’; the Holocaust; anti-Semitism; the ‘Uprising in Warsaw’ and the Battle of Britain.

He talks about the Munich Agreement and the Yalta Agreement; learning English; his training in identifying aircraft; the bombing of Dresden; his medals; take offs and landings; briefings and morale.

He talks about the entertainment they devised, the popular songs, speaking Polish on the intercom when on ops. On D Day was outside Buckingham Palace, dangers over the target, Bomber Commands bombing campaign.