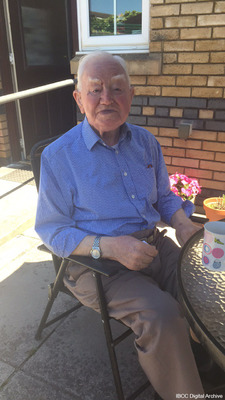 Before joining the Royal Air Force, Philip was a valet to Captain Fletcher at Margam Castle. At the age of 19 he trained as a flight engineer at RAF St Athan, working on the Halifax. At RAF Dishforth in Yorkshire crews were formed and Philip joined a crew of Canadians. At the Heavy Conversion Unit they were flying Mk1 and Mk2 Halifaxes before being posted to 192 Squadron based in RAF Foulsham, Norfolk, to fly Halifax Mk 3. During his service Philip flew to France, Germany and Norway. When he had a 48 hour leave he would sometimes stay in the Salvation Army Hostel in Norwich or go to the flight engineers section to learn more about the aircraft. The crew also occasionally went to Sheffield, staying in the Albany Hotel and visiting a coal mine and a brewery. Philip recalled a trip near Saarbrücken when they were monitoring the V-2 rocket. He also mentioned a posting to RAF Lossiemouth in Scotland. He had done 33 operations with the squadron. When the war ended Philip worked clearing stations of vehicles to be taken to RAF Grafton Underwood. In 1982 Philip and the navigator, Bert, arranged a reunion in Canada. Philip received the MBE for his work as a welfare officer working with ex RAF personnel for over 40 years.