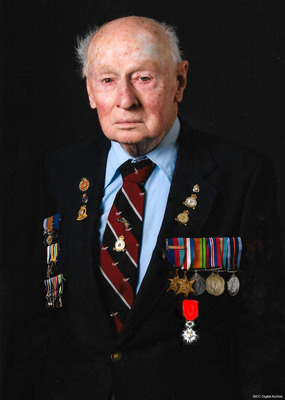 John Eppel grew up in Australia and joined the Royal Australian Air Force. After training, he completed 30 operations as a navigator with 550 Squadron. He describes initial training in Australia and the journey by sea via the United States, then further training in Britain before his posting as a navigator with 550 Squadron. He says he was fortunate in having a ‘safe tour’ and describes only one incident, at Emmerich, when the aircraft had a close confrontation with the enemy. He describes the crewing-up process at RAF Finningley and also provides details about H2S and GEE. He also describes many of his leisure-time activities, the personalities me met, the friendships he formed with his crew members and others he met during his years in Britain. He also gives an account of how he spent VE Day and VJ Day. After the war he returned to the same company where he’d worked before the war and retired after forty-eight years.