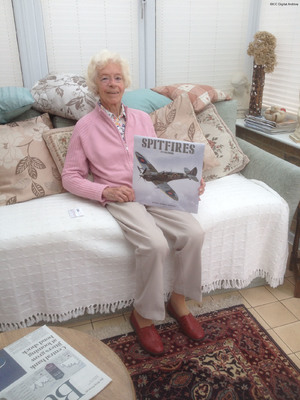 Mary Wilkins Ellis was born in Oxfordshire and became interested in aviation at a very early age. She experienced her first flight with Alan Cobham’s Flying Circus. Mary learned to fly while still at school and obtained her licence in 1938. When the war began all civil flying was stopped and she thought her flying life was over until she heard a request on the radio for ladies who had a flying licence to join the Air Transport Auxiliary. She applied and was accepted immediately. She began her training at Hatfield and then at White Waltham, where she learnt the rudiments of flying various different kinds of aircraft as well as emergency training, meteorology and morse code. As with all ATA pilots, she began ferrying planes to airfields without the benefit of a radio and landing without any assistance. This led to a number of close calls. One day she ferried two Wellingtons, a Spitfire, a Defiant and a Swordfish. Towards the end of the war she also flew a Meteor.