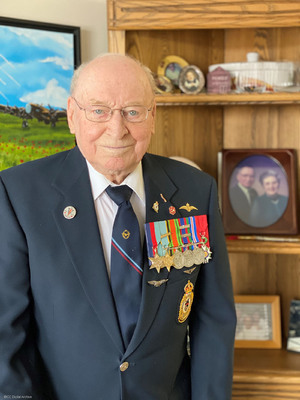 Reg Harrison grew up on a farm in Saskatchewan and enjoyed watching aircraft when they flew over. He had his first flight as a youngster when he was lent five dollars by a shopkeeper. He volunteered for aircrew as soon as he was of age and began his training as a pilot. He had four crashes which earned him the nickname, Crash. The first incident took place while he was on his second dickie trip and the aircraft crashed. He and another member of the crew then heard the pilot shouting for help and returned to get him out of the aircraft. Reg sustained burns and was treated at East Grinstead Hospital. On their thirteenth trip his rear gunner was worried and suggested they call this trip 12A rather than thirteen. They crashed on take-off. On another occasion he and the crew had to bale out over England. Again, on another occasion while on an operation they came under fire from a Halifax who had mistaken them for a German aircraft. They just managed to get the stricken aircraft back and crashed at RAF Carnaby.
When he had leave, Reg would often go and visit his family who lived near Hull. He completed nineteen operations before he was screened, as his Wing Commander felt that he had been lucky too many times and might not be so lucky the next time. Reg has always been mindful of the loss rate in Bomber Command. He has a photograph taken a day after he got his wings. Of the four airmen in the picture he was the only one who returned home.