The memories of LAC Fred Perkins 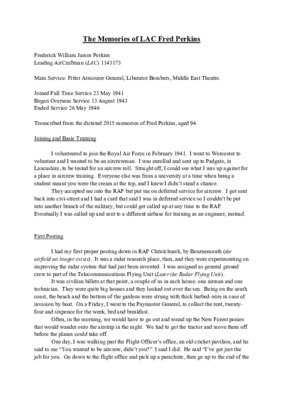 The memories of LAC Fred Perkins

Covers joining the RAF, training as an engineer and first posting to RAF Christchurch which undertook radar research. Writes of life and flying as observer in Fairey Battle on radar measurement flights. The unit then moved to RAF Defford. Goes on to describe his training as a fitter and armourer and his journey to the Middle East before arriving in RAF Lydda Palestine. Provides details of life and activities in middle east bomber command working on B-24. He then moved back to RAF Abu Sueir in Egypt. Gives account of working on B-24 as well as Spitfire and Hurricane aircraft. Gives account of armourers work on all three aircraft. Provides a paragraph on local wildlife. After the war was sent to RAF Shaibah in Iraq and he describes life and activities there. Concludes with description of journey home.