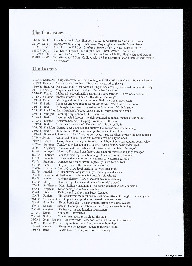 A list of aircraft, operations and details of each operation undertaken by Arthur Tindall.

24/25 April 1945
Lancaster Mk.III ME625 OF-T Target: MUNICH
Crew: W/O Clarke as rear gunner
Bomb Load: 12 x cluster flares. 1 x green TI No.4
Time up: 20:53. Down 06:27.
Bombing by visual on markers at datum point, H2S over target. Had good run from yellow TI. Our flares went straight across town which was clearly seen. Concentration of fires seen after leaving target. Glow seen for 100 miles.


26/27 April 1944
Lancaster Mk.III ME625 OF-T Target: SCHWEINFURT
Crew: W/O Clarke as rear gunner.
Bomb Load: 12 x 7” flares. 2 x green TI No.4.
Time up: 21:33. Down 05:44
No cloud, slight haze, visibility good. Bombed on H2S. Several lots of flares were down and one green TI which Master Bomber was instructing aircraft to bomb. All flares dropped on one run as original 6 not gone before orders were received to back up.

[Page Break]
28/29 April 1944
Lancaster Mk.III ME625 OF-T Target: KJELLER (OSLO)
Crew: W/O Clarke as read [sic] gunner.
Bomb Load: 6 x clusters 7” flares. 1 x yellow TI no.4. 5 x1000lb MC.
Time up: 21:08. Down 04:12
Good visibility permitted visual identification of runway on airfield. Flares dropped across runways between aiming point “A” and “B”. RSF on roof of one building (Aiming point “A”). Bombs dropped running due west across target. As we were early to bomb, results not seen but rear gunner saw stick of bomb bursts on building as we were leaving the area.

6 June 1944
Lancaster Mk.III ND589 OF-D Target: ST. PIERRE DU MONT
Crew: S/L J.A. Ingham. (Deputy Controller) Normal crew.
Bomb Load: 11 x1000lb MC. 4 x 1,000 lb GP.
Time up:02:52. Down:06:56
Weather over St. Pierre du Mont 10/10th cloud base 8,500 – 9,000ft. Broken low cloud below. Target identified visually and by Oboe markers red TIs. Layer of cloud made it impossible to bomb from any greater height than 9,000ft. Controller gave orders to decrease height but 2,000ft. Oboe markers not down on time; first one seen in sea just off shore. PFF very good and green TIs were rather scattered at first. Bombing Oboe seemed to be fairly good. Sticks seen bursting or target. Visibility was impeded by ice on the bomb aimer’s Perspex and pilots’s windscreen. VHF rather noisy on channel B and changed to channel C on Controllers order. Still a lot of interference probably due to people transmitting at the same time.

6/7 June 1944
Lancaster Mk.III ND589 OF-D Target: ARGENTAN
Crew: Normal plus F/L W.G. Cooper (Vis. B/Aimer)
Bomb Load: 2 x red/green star Flares. 3 x green TI no.23. 15 x 500lb MC.
No times entered in ORB. Average for other aircraft Up 23: 30 Down 03:20
Good vis. 10/10ths Stratus cumulus 6-7,000ft. Target located visually. Green TI lighting actual buildings. Backing up was on the target too. Marking went through very well indeed in spite of the fact that most of the illuminating flares overshot by about 2 miles. Oboe marker was not seen but it may have burst on the ground. On reaching the target 00:53hrs, appeared to be large buildings in the town itself well on fire. Attack appeared successful. Marking appeared 60 yards west of aiming point and bombing generally was w [sic]

9/10 June 1944
Lancaster Mk.III ND589 OF-D Target: ETAMPES
Crew: Normal.
Bomb Load: 2 x TI green. 2 xTI red. 2 x TI yellow. 2 x Flares green/red stars 10 x 500lb MC.
3 x 4.5” rec. flares.
Time up: 21:56. Down: 02:10
Weather 10/10ths cloud, base 7,500ft. Vis. moderate, slight haze. Target traced by Oboe marker. First flares were 2-3 minutes late. Oboe marker also one minute late. Initial marking was not quite as ordered and a long time elapsed before permission given to bomb at H+14, meantime some aircraft had bombed. Released green TI on RSF on Controller’s orders 00:05hrs approx. (after one dummy run), then attacked by fighter for two minutes. Patter between gunners and pilot was seriously impeded by VHF. In spite of this, the gunners succeeded in shooting the fighter down on Controllers instructions. As an anti-climax, our bombs released safe as during attack by enemy aircraft the switch was put in Safe in case we had to jettison, and this was forgotten when bombs were dropped. Controllers instructions on VHF passed on by W/T Spoof yellow TI seen to cascade after attack but quiet useless as a decoy.

31 July 1944
Lancaster Mk.III PB181 OF-D Target: JOIGNY-LAROCHE
Crew: Normal Crew, plus F/Sgt M.H. McBride, Front Gunner.
Bomb Load: 4 x 500lb MC ( ½ hr). 11 x 1,000 LB (1hr).
Time up: 17:20 Down: 23:20
Weather good, no cloud, slight haze. Located target by visual on canal and yards and by TIs. Lax attention to height caused trouble when the two forces divided. A gap of at least 500ft should be left between the two forces. Navigation could be better controlled if the Path Finder Force were not divided. Flying speed after the target was increased above that laid down by 10mph at least. It would be better policy to reduce rather than increase speed after leave the target, to allow formation to close up the straggle due to bombing, and also to allow any aircraft damaged to have a chance to keep up. Landed at Swinderby.

6 August 1944
Lancaster Mk.III PB133 OF-C Target: BOIS DU CASSON
Crew: Normal
Time up: 09:12. Down 13:59.
There are no individual crew reports for 6/8.44. No Bombs Loads are listed But there is a resume of the operation carried out that day.
[underlined] Weather [/underlined]
Clear, break over target, cumulus tops 15,000ft to 20,000ft in target area.
[underlined] Results [[/underlined]
Crossing English coast Controllers Gee and intercom failed. As planned to home to target on Gee, handed over to G/38 (F/L Drinkall-missing)). [sic] Controller and Deputy changed position, Controller having fixed up poor intercom on 1196 (after 7 minutes) stood by in advisory capacity. About 40 miles inland a big cumulus cloud was lying across track. Deputy descended to 16,000ft and broadcast that he was going to take Force below the cloud. Controller warned him not to go below 15,000ft, and next advised him to turn to starboard. Deputy ordered Force to diverge and dive through cloud. Formation broke up in cloud. On emerging, Main Force were scattered over many miles of sky. There were some attempts to gather into a bunch (or bunches) but impossible to regain proper formation. As a result some aircraft appeared to bomb the primary. The number bombing was not large enough to impede daylight bombing runs and the other bombing of the target that did occur was believed accurate. Other aircraft bombed as best they could with some mistaking pin-points owing to icing troubles and the rush. Attack scattered over a large area.
Aborted : S/97 aborted mission, unable to identify target
Missing J/97 ND 840 (F/O Bucknell)
Opposition encountered: Moderate heavy flak seen. Fighters in target area attacked aircraft which were most dispersed on breaking cloud.

11/12 August 1944
Lancaster Mk.III PB181 OF-D Target: GIVORS
Crew: W/C Ingham (Deputy Controller 1) Normal Crew.
Bomb Load: 6 x red TI No. 16. 2 x yellow TI No . 16. 1 x yelow [sic] TI B22.
2 x Flares green/red. 4 x 1,000lb. 1 x 1 ,000lb (LD)
Time up: 20:39. Down: 05:17
Weather clear. Target located by illuminating flares. Unable to contact Controller so took over controlling. First flares fell two miles east, not illuminating target properly. Flares very scattered, heard green Force Controller ask for reserve flares. Marker Leader requested Wanganui but it did not function as a skymarker and went sraight [sic] down. We postponed H-hour for 5 minutes at 01:00hrs reserve flares then forthcoming, which gave good illumination. First red TI (at 01:012 hrs) assessed as 600 yards south, then second red TI more accurate on aiming point. This was backed up by third red which fell at least 500 yards to west. B/U asked to back up centre TI at 01:07hrs, which promptly went out. This left two inaccurate ones so instructed B/U to drop red directly between two and did so myself at 01:11 hrs. These TIs were subsequently thought to be in marshalling yard itself and were assessed by Marker Leader as 300 yards east of aiming point, so Main Force were ordered to bomb these with zero wind and ignore most westerly red TI, which was not cancelled as main concentration was obvious. Bombing subsequently well concentrated on these, though some ticks overshot to north and south. One or two fires seen. Yellow datum point TI not dropped by us as top pre-occupied as Controller. Landed at Witchford.